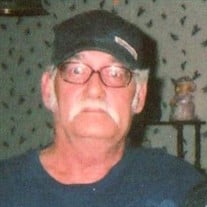 Mr. James “Amos” Elvis Preslar, II, 65, of East Peoria, IL passed away at 12 PM on Monday, October 30, 2017 at UnityPoint Health Methodist Hospital, Peoria, IL. James was born on September 28, 1952 in Omaha, NE to James Sr. and Betty (White) Preslar. His foster parents were James and Ruth Johnson. James was a Christian and a family man. People say, he could be ornery, but he had great family values and loved his family, especially Peggy and his grandson, David. He also loved his dogs Gismo and Lady. They are lost without him, wondering around waiting for him to come through the door at home. James played his music loud and would often just break out in a song. He loved Rock & Roll, Country Music and the Blues. James leaves to cherish his memory his loving companion, Peggy J. Fravell of East Peoria; his grandson, whom he raised, David Graff of East Peoria; his dogs, Gismo and Lady; two sons, Robert “Jason” Preslar and James “Chris” Preslar both Benton, IL; one daughter, Kathy Tucker of West Frankfort, IL and one sister, Carol Buchanan both of Energy, IL; 6 grandchildren and many friends who loved him. He is preceded in death by his parents, foster parents and 2 sisters, Barbara Summers and Dixie Preslar. A memorial service will be announced at a later date. Simons Mortuary has been entrusted with arrangements. Online condolences may be made at simonsmortuary.com.

The family of Mr. James "Amos" Elvis Preslar II created this Life Tributes page to make it easy to share your memories.

Send flowers to the Preslar family.