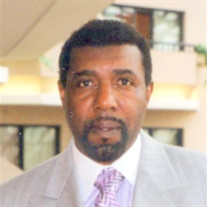 Mr. James “Doc” Elbert Ferguson, 70, of Peoria, IL transitioned to his heavenly home at 6:08 a.m. on Monday, November 4, 2019 at Generations Nursing Home in Peoria. James was born on June 28, 1949 in Augusta, Arkansas to John and Leola (Peten) Ferguson, Sr. and married Margaret Davis on April 4, 1974 in Peoria, IL. James attended George Washington Carver High School in Augusta, Arkansas and Arkansas Baptist College in Little Rock, Arkansas. Prior to graduation, he was enlisted into the U.S. Air Force in November, 1968. He completed Basic Training at Lackland Air Force Base in San Antonio, Texas and began Phase-1 Medical Training at Sheppard AFB in Wichita Falls, Texas. He was then transferred to Wright-Patterson AFB in Dayton, Ohio as a Field Medical Specialist, and also trained as a Dental Hygienist as a Peace-Time Specialist. He was deployed to Viet-Nam in June, 1971 where he served as a Mobility Air Combat Medical Specialist. After his tour in Viet-Nam, James was sent to Northern Thailand where he worked at a refugee camp, transferring refugees out of Laos and Cambodia to be resettled into the United States and other allied countries. After returning home, James attended Illinois Central College, worked as an Insurance Adjuster in the Benefits Department at Caterpillar Inc. for 25 years, and joined the Air Force Reserves, retiring with 22 years total in military service. James had many hobbies. He was an avid reader, loved gardening, woodworking, and the outdoors. He was also a huge Jimmy Hendrix fan. He would always boast that his life was an adventure. James is survived by three sons, Scott (Nicole) Ferguson, Rashid (Gloria) Ferguson, and Jamal Ferguson; seven brothers, Orville Nevels, Ronald Ferguson, John Ferguson, III, Walter Ferguson, Michael (Robin) Ferguson all of Peoria, Grice Ferguson of Aurora, IL and Troy (Monique) Ferguson of Peoria; three sisters, Ivory Ferguson, Judy (Larry) Vincent and Jo Wanda Ferguson, all of Peoria. He is also survived by five grandchildren, Kaitlyn, Isiah, Anthony, Kaden and Jordin, and host of nieces and nephews. He is preceded in death by his parents and one sister, Annie Ferguson. James accepted Jesus Christ as his savior at a young age and remained a believer of God’s Word throughout his life. Funeral services will be held at 11:00 a.m. on Saturday, November 9, 2019 at Morning Glory Community Church, 2906 N. Twelve Oaks Drive, Peoria, IL 61604. Visitation will be one-hour prior, beginning at 10:00 a.m. Pastor Marlon Young, Sr. will officiate. James will be laid to rest at Camp Butler National Cemetery in Springfield, IL where full U.S. Air Force Military Honors will be rendered. Simons Mortuary has been entrusted with arrangements. Online condolences may be made at SimonsMortuary.com.

The family of Mr. James "Doc" Elbert Ferguson created this Life Tributes page to make it easy to share your memories.