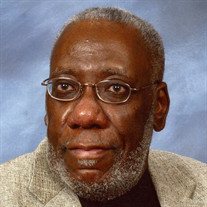 Mr. James David Jordan, 75, of Peoria, IL passed away on Wednesday, January 31, 2018 at his home. James was born on November 18, 1942 in Newport, Arkansas to William and Willa Mae (West) Jordan. He worked for Caterpillar, Inc., after High School. He later attended the University of Tennessee after which he became a case worker for Illinois Department of Human Services. James was a faithful member of St. Paul Baptist Church where he had been a member of the Men’s Sunday School Teaching Team, the Prayer Ministry and the Benevolent Committee. He was a past member of the Baptist Laymen’s Association. He was one of the Founders of the “Albert and Bertha Burch Memorial, Inc. As his health declined, he was aided and encouraged by several friends. The family is very grateful to these special people, including Ms. Bobbie Ashby, Dr. Francessca Armmer, Sherry Carter-Allen, Rev. Robert Donaldson, John Guyton, Willard Jackson, Lamont Johnson, Bobby Williams and Nathel Williams among others. James is survived by six sisters; Charlotte (Bill) Gordon, Mary Kyle, Sylvia Glover, Faye Douglas and Francine Knox all of Peoria and Janie (Manuel) Jordan Cuevas of Las Angeles, CA; four brothers, William Jordan, Gerald (Retta) Jordan and Anthony Jordan all of Peoria and Troy Knox of Denver, CO. He is also survived by many nieces, nephews and cousins who loved him dearly. He was preceded in death by his parents and two brothers, Marcus Knox and Carlton Jordan. Funeral services will be held at 11 am on Friday, February 9, 2018 at St. Paul Baptist Church with a visitation beginning at 10 am. Pastor Deveraux Hubbard will officiate. James will be laid to rest at Mt. Hawley Cemetery. Simons Mortuary has been entrusted with arrangements. Online condolences may be made at simonsmortuary.com. The family would like to thank everyone for their expressions of sympathy during this time of our bereavement. In lieu of flowers please send a donation to: Albert and Bertha Burch Memorial, Inc. P.O.Box 5755 Peoria, IL 61601.

Mr. James David Jordan, 75, of Peoria, IL passed away on Wednesday, January 31, 2018 at his home. James was born on November 18, 1942 in Newport, Arkansas to William and Willa Mae (West) Jordan. He worked for Caterpillar, Inc., after... View Obituary & Service Information

The family of Mr. James David Jordan created this Life Tributes page to make it easy to share your memories.

Send flowers to the Jordan family.