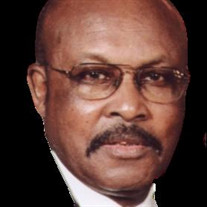 Mr. James Albert Little, 89, of Peoria, IL transitioned from this life to his heavenly home at 7:19 pm on Sunday, April 12, 2020 at his home. James was the tenth of eleven siblings born to Frank Sr., and Louise (Hawkins) Little on September 18, 1930 in Keirn, MS. James was 12 years old when he accepted Christ as his Lord and Savior. He was educated in the Mississippi Public School System. The family journeyed to the small Mississippi towns of Lexington, Mound Bayou, Egypt and Greenwood before moving to Peoria, IL in the early 1950’s to pursue greater opportunities. He joined the Army in 1951, fighting in the Korean War. This experience changed his life in a profound way. His heroic nature was recognized by distinguished service medals. As an outcome of his military experience he developed discipline in everything he did. As he lost many of his friends during the War, it cemented his faith in Christ. He dedicated himself to living a life that reflected his belief in the Lord. He was a man of high integrity and honesty, being direct with all that he knew and the people that he touched. James found his life-long partner, Georgia Mae Gordon, and married her on March 27, 1955 in Peoria, IL on the front porch of Georgia’s parents’ home. Georgia was the love of his life and their love lasted for 65 years. James joined Caterpillar Tractor Company in 1967. Many of his life-long friends come from almost 30 years of service as he found his life’s work at the company. He retired in 1996 to spend more time with his bride and grandchildren. He was a dedicated member of the New Morning Star Missionary Baptist Church for over 50 years. He was a member of the men’s choir and was an usher. His love of Christ and church where always at the center of his life. James leaves to cherish his most precious memories, his loving and devoted wife, Georgia Little of Peoria, IL; two sons, James Little of Peoria, IL and Brian (Anise Wiley) Little of San Jose, CA and Long Grove, IL; one daughter, Barbara Jean Brooks of Peoria; daughter in law, Carla Little of Gurnee, IL; one sister, LC Watson of Memphis, TN; six grandchildren, Kristen, Kial, Kelsey, Konnor, Keralynn and Kamille; and a host of nieces, nephews, other relatives and friends. James is preceded in death by two sons, an infant son, Jeffery Little and an adult son, Steven Little; six brothers, Alex Shields, Robert Little, John Little, Frank Little, Jr., Willie Little and Nathaniel Little and three sisters, Anna Perry, Mae Lou Hinton and Flora Banks. A private funeral service will be held at Simons Mortuary on with Pastor Cleveland Thomas, Sr. of New Morning Star M.B. Church will bring words of comfort to the family. James will be laid to rest at Swan Lake Memory Gardens with full Military Honors. Simons Mortuary has been entrusted with arrangements. Online condolence maybe made at SimonsMortuary.com. The private funeral service will be streamed on Facebook Live on the Simons Mortuary Facebook page on Saturday, April 18, 2020 at 11:30 am. Also will be available for viewing later on SimonsMortuary.com.

Mr. James Albert Little, 89, of Peoria, IL transitioned from this life to his heavenly home at 7:19 pm on Sunday, April 12, 2020 at his home. James was the tenth of eleven siblings born to Frank Sr., and Louise (Hawkins) Little on September... View Obituary & Service Information

The family of Mr. James A. Little created this Life Tributes page to make it easy to share your memories.

Send flowers to the Little family.