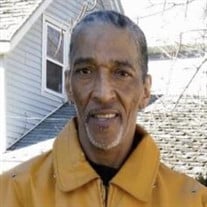 Jazz B. Jackson, Jr., 61, of Peoria, IL transitioned to his heavenly home at 1:50 am, Wednesday, April 29, 2020 at his home surrounded by family. Jazz was born on August 20, 1958 in Peoria, IL to Jazz, Sr., and Mattie Esther (Dunlap) Jackson. Jazz was educated in Peoria District 150 and was a 1976 graduate of Manual High School. Jazz was a phenomenal basketball player, starting on the varsity team as a Freshman. He played in the Gus Macker for many years winning many trophies. Jazz as his name would imply, was a sharp dresser. He had a passion for fishing, music and riding his flamboyant bike with the flashy lights at night. Jazz also loved his dogs and spending time with his friends and family, especially his grandchildren. Jazz worked in construction for many years. Jazz leaves to cherish his most precious memories his loving and devoted family including his mother, Mattie Dunlap of Peoria, IL; his companion, Felecia "Nene" Brock of Peoria, IL; two daughters, Shetike Jackson of Peoria, IL and Enjeania “GiGi” Brown of Minneapolis, MN; five sisters, Faye Jackson of Chicago, IL, Phyllis (Rodney) Farlow, Pamela Jackson, Cheryl Jackson all of Peoria, IL and Joyce Jackson of Milwaukee, WI; two brothers, Cyrus Jackson and Gary Davis both of Peoria, IL; eight grandchildren; two great-grandchildren; childhood friend, Rell; special friends, D’Mac, Jamal and Monk; and a host of nieces, nephews, other relatives and friends. He is preceded in death by his father; one sister, Wanda Jackson; his grandparents, Katie and T. Thornton and Kattie and John Dunlap, Sr., and a special niece, Taquillia Jackson. Private funeral services pending.

The family of Mr. Jazz B. Jackson, Jr. created this Life Tributes page to make it easy to share your memories.