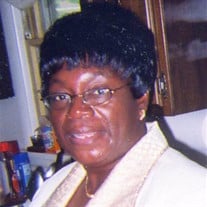 Jeanette Elizabeth Dailey, 61, of Peoria, IL passed away peacefully at 5 am, Saturday, April 22, 2017 at her home. Jeanette was born on June 16, 1955 in Newberry, FL to Claronell (Jordan) and Jim Christopher. She graduated from Newberry High School. Jeanette decided to move to Peoria in 1974 after visiting family here. She married the Rev. Cleo Dailey, Jr. Jeanette was a faithful member of New Mt. Sinai where she was choir director and served in the missionary society. She began working at Woolworth’s downtown Peoria and later worked at OSF St. Francis Medical Center. Jeanette worked as a driver for City Lift for the past 13 years until her health failed. Jeanette was loved by all; she never met a stranger. She was a surrogate mother and grandmother to children in the community. She was her grandchildren’s “# One Fan”; always going to all their sports games. She loved to cook and garden. Jeanette leaves to cherish her most precious memories her devoted and loving children; LaTasha Ann Dailey, Terrance Davis, Minister Cleo Dailey, III and Kendra Marie Dailey all of Peoria; her mother, Claronell Steven and one sister, Cecelia Smith both of Newberry, FL; five grandchildren, Kahlil Dailey, Kendric Dailey, Jekhari Dailey, DreAnna Dailey and Kahmr Dailey all of Peoria; and a host of other relatives and friends. She is preceded in death by her father; one son, DeAndre Dailey; four sisters, Nina Lee, Ollie Jean Hall, Eunice Jackson, and Vivian Griffin and one brother, Samuel Christopher. A memorial service will be held at 11 am on Saturday, April 29, 2017 at New Mt. Sinai M. B. Church with a visitation one half hour prior beginning at 10:30 am. Pastor Joseph Cherry and Minister Cleo Dailey, III will officiate. Simons Mortuary will be entrusted with arrangements. Online condolences may be made at simonsmortuary.com.

Jeanette Elizabeth Dailey, 61, of Peoria, IL passed away peacefully at 5 am, Saturday, April 22, 2017 at her home. Jeanette was born on June 16, 1955 in Newberry, FL to Claronell (Jordan) and Jim Christopher. She graduated from Newberry High... View Obituary & Service Information

The family of Mrs. Jeanette Dailey created this Life Tributes page to make it easy to share your memories.

Send flowers to the Dailey family.