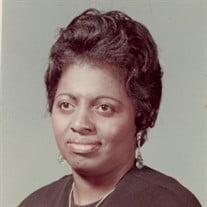 Mrs. Jessie Mae Johnson-Daniels, 91, of Peoria, IL transitioned to her heavenly home at 6 PM on Thursday, August 6, 2020 at home surrounded by her family. Jessie was born on November 17, 1928 in Hugo, OK to Jesse and Mary Porter. After six years of living with her parents, her devoted aunt and uncle, Mose and Joyce Hatten raised Jessie. On December 12, 1996 she married Rev. Elias Daniels in Las Vegas, NV. He preceded her in death on September 11, 1999. Jessie professed a hope in Christ at an early age. She united with St. Paul Methodist A.M.E. Church in Hugo, OK. She later moved to Foreman, AR where she united with St. Matthews Baptist Church and was baptized by Rev. McCoy and was a faithful member until 1947. Because of her Christian training, wherever she moved she would unite with a Baptist church. In 1969 she attended Zion M.B. Church until 1972. She united with Zion Baptist Church under the leadership of Rev. Robert McCoy. She remained a faithful member of Zion Baptist Church until her homegoing. Jessie was actively involved in every aspect of the church’s activities. She served as chairperson several times of the Women’s Day, Churches Anniversaries, Pastor’s Anniversaries and Mistress of Ceremonies of numerous gala affairs. Jessie enjoyed working during vacation Bible School. She team taught one year and served as an Art director many years. She also received many certificates for her services. Jessie began her education in Hugo, OK 1933, later moved to Foreman, AR the same year where she enrolled in elementary school at Unity Elementary High School where she graduated with honors. The President of Philander Smith College, Dr. Lafayette Harris delivered the class address. She was encouraged by him to attend Philander Smith College, Little Rock, AR in 1951.She received her Bachelor of Science Degree in Home Economics. In 1961 she received her Master of Science Degree in Elementary Education from the University of Arkansas in Fayetteville, AR. She did post graduate work at the University of Arkansas, Bradley University and Illinois State University, completing sixty-five hours. Jessie began her teaching career in 1951 as a math and science teacher at Vanndale High School in Vanndale, AR. In 1955- 1956, she taught 5th grade at Franklin Elementary School in Blytheville, AR. In 1962 she taught 1st grade in Hayti Reorganization Elementary School until 1967. In September of 1967 she became Director of the Emergency Food and Medical Service. She worked with indigent people, and received great joy in teaching them how to economize and write their name for the first time. After two years of government services, she moved to Peoria in August 1969. She was the first black person to teach at Calvin Coolidge Elementary School, where she taught 2nd grade until the reorganization of schools in District 150. She was transferred to Whittier Primary School until she retired in May 1991. She tutored before and after school each day, and after her retirement she continued donating her time tutoring in her home. Jessie was a member of Sigma Gamma Rho Sorority. She served as Grammateus for many years. She was a member of the National Association of University Women and served as secretary and 2nd Vice President, a life member of the Peoria Area Retired Teachers Association, National Organization of Negro Women, she served on the board of Commission on Human Relations, a member of the Life member and Golden Heritage member of the NAACP Peoria Branch. She served as chairperson of the Life Membership Committee of the NAACP. Jessie was the recipient of many awards, plaques and certificates for outstanding leadership, contribution as an educator and for perfect attendance for many years while teaching in Blytheville, AR and Peoria, IL. For many years she was one of the presenters on methods and techniques in teaching reading, math and art on the elementary level at the Teacher’s Workshop. Jessie leaves to mourn her homegoing, her devoted daughter and son-in-law, Marva and Reginald McDuffie of Orlando, FL; her son, Larry Evans of Peoria, IL; one sister-in-law, Luberta Porter of Oklahoma City, OK; four aunts, Surtha Adams of Corona, CA, Joyce Hatten of Oklahoma City, OK, Tressie Henderson of Seattle, WA and Pauline Wakefield of Idabel, OK; six grandchildren, two great grandchildren and a host of cousins, other relative, friends, family and the Zion Baptist Church family. She is preceded in death by her husbands, parents; grandmothers, five brothers, Henry, Arthur, John, Willie B. Davis; and George Porter, one sister, Geraldine Davis and her daughter-in-law, Cheryl Evans. A private funeral service will be held at 11 am, Thursday, 13 2020 at Zion Baptist Church with a visitation beginning at 10 am. Pastor Samuel Duren will bring words of comfort. Jessie will be entombed at the American Mausoleum. The funeral service will be live streamed on Simons Mortuary's Website or Facebook page at https://www.facebook.com/Simons-Mortuary-232095303487150 promptly at time of the service. Due to Covid-19 restrictions, social distancing and attendance limits will be observed. Simons Mortuary has been entrusted with arrangements. Online condolences may be made at SimonsMortuary.com. As the States begin re-opening in response to the Global Coronavirus Pandemic, some people are returning to their previous normal living standards. Unfortunately, we are now in our new normal as unreal and sometimes uncomfortable as the socially distancing and continuous use of protective masks may feel. *In an effort to mitigate the spread of COVID-19, we ask that everyone in attendance: wear a face mask and refrain from hugging, kissing and shaking hands (as hard as it is to see someone you care about and not touch them). Thanks in advance for your cooperation! *It is our responsibility as a Funeral Directors, to do everything we can to advise families in order to honor our beloved Families and to keep everyone as safe as possible. The chapel can socially distance and seat a limit of 50 or less people. All others will be able to flow through and view prior to beginning the Celebration of Life Ceremony.

Mrs. Jessie Mae Johnson-Daniels, 91, of Peoria, IL transitioned to her heavenly home at 6 PM on Thursday, August 6, 2020 at home surrounded by her family. Jessie was born on November 17, 1928 in Hugo, OK to Jesse and Mary Porter. After six years... View Obituary & Service Information

Send flowers to the Johnson-Daniels family.