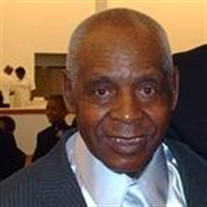 Mr. John Sherman Hosea, Sr., 95, of Peoria, Illinois; left his earthly home to be with the Lord at 5:15 a.m. on Sunday, November 24, 2019 at his residence surrounded by his family. John was born on August 29, 1924 in Bloomington, IL to Matthew and Cartheda (Sargent) Hosea. He married Mollie McDonald in Peoria, IL. John retired from Hanna City State Schools for boys as Truant Officer. He also worked at Commercial National Bank for many years. John was a World War II era U.S. Army Veteran. He was a longtime Mason. John loved jazz music, dancing and singing. He was a very happy and independent man who was always fixing things. John loved his grandchildren and playing corn hole, basketball and tennis. He was a Dallas Cowboys fan. John leaves to cherish his precious memories his loving and devoted wife of 75 years, Mollie Hosea of Peoria, IL; three daughters, Myretta (Devon) Sydnor, Shirlene “Nina” Bolden both of Peoria and Yvonne “Noogie” (Nathaniel) Wickham of Dunlap, IL; two sisters, Mary Hursey and Barbara Waddell both of Bloomington, IL; 9 grandchildren, 19 great-grandchildren, host of great great-grandchildren; and a host of nieces, nephews, cousins, other relatives and friends. He was preceded in death by his parents, one son, John Hosea, Jr., one daughter, Dawn Hosea, one grandson, John Hosea, III and three brothers. Funeral services will be held at 11 a.m., Monday, December 2, 2019 at New Cornerstone Baptist Church with a visitation at 10 a.m. Rev. Dr. Mark McConnell, Pastor will officiate. John will be entombed at Historic Springdale Mausoleum where Military Rites will be accorded. Simons Mortuary has been entrusted with arrangements. Online condolences may be made at SimonsMortuary.com.

The family of Mr. John Sherman Hosea Sr. created this Life Tributes page to make it easy to share your memories.

Send flowers to the Hosea family.