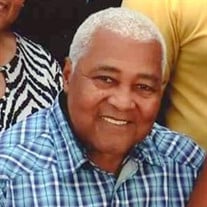 Mr. John Henry Jackson, Jr., 81, formerly of Peoria, IL, passed away at 11:30 am on January 19, 2022 at Harbor Hospice, Houston TX. John (also known as) Hatrat Najeebe, was born on February 1, 1941 in Mound City, IL to and John, Sr. and Grace (Woodson) Jackson and was raised by John Rayford. He married his childhood sweetheart, Edythe Teague (also known as) Khalisah Najeebe on January 15, 1960 in Peoria IL. John was a residential and industrial Carpenter for over years 40 years. He belonged to the Carpenters Union 183. John was Peoria Manual High School graduate. He was a Golden Glove Boxing and awarded a WBA (World Boxing Association) Champion. He enjoyed fishing, gardening and growing strawberries. John excepted Christ at early age and was a spiritual person. John leaves to cherish his most precious memory, his loving wife, Edythe Teague “Khalisah Najeebe” of Houston, TX; one son, Majeed (Lisa) Najeebe of LaPorte TX; three daughters, Aliyah Najeebe, Jamila Moussadaq and Raheema Cardenas all of Houston TX; three brothers, Goldus (Dollerster) Jackson, Earl, Sr. (Denise) Jackson and Thelbert (Mable) Rayford and all of Peoria IL; five sisters, Rochelle Ross, Anita Hightower, Patricia Rayford, Savannah (Sterling) Davis, and Grace (Jesse) Armstrong all of Peoria Illinois; 7 grandchildren, Nadia Moussadaq, ILham Moussadaq, Angelica Houida, Ramzi Najeebe, Rami Najeebe, Sameera Cardnas and Saleema Cardnas; 1 great grandson, Joseph Brown all of Houston, TX and a host of nieces, nephews, cousins and friends. He is preceded in death by his parents, one son, Muhammad Najeebe, one brother, Gregory Rayford, one sister, Lola Rutherford, two brother-in-laws, J.B. Ross and Willie Hightower and one grandson, Rostom Najeebe. A memorial service will be held at 11 am on Saturday, March 5, 2022 at Simons Mortuary with a gathering beginning at 10:30 am. Pastor William Preston of City on the Hill Church will officiate. Simons Mortuary has been entrusted with arrangements. Online condolences may be made at SimonsMortuary.com. Due to Covid-19 restrictions, social distancing is encouraged to be consistent with recommendations from the National Funeral Directors Association (NFDA), funeral home directors have been instructed and should follow CDC guidelines on gatherings, including those directly related to funerals, visitations, or graveside services. *In an effort to mitigate the spread of COVID-19, we ask that everyone in attendance: wear a face mask and refrain from hugging, kissing and shaking hands (as hard as it is to see someone you care about and not touch them). *It is our responsibility as Funeral Directors, to do everything we can to advise families in order to honor our beloved Families and to keep everyone as safe as possible. Thanks in advance for your cooperation!

The family of Mr. John Henry Jackson Jr. created this Life Tributes page to make it easy to share your memories.