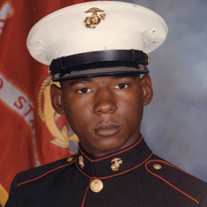 Mr. John Edward Mosley, Jr., 50, of Chillicothe, IL, passed away at 5:50 PM on Friday, July 19, 2019 at his home. John was born on June 7, 1969 in Chicago, IL to John, Sr. and Ella (Stacy) Mosley. John graduated from Richwoods High School in 1987 and joined the US Marine Corps immediately following high school, where he served his country for four years. John was baptized at the Pentecostal Church of Jesus Christ under the leadership of Suffragan Bishop Val Johnson and received the gift of the Holy Ghost. John had a long career in property management and maintenance, but it was his last position as Maintenance Supervisor at Glen Oak Towers where he really found a home. The recipient of several awards over the years, John was truly beloved by both the staff and the residents of Glen Oak Towers alike. Every one that knew John could tell he was a real jokester and loved comedy. He had a laid-back style and had the coolest, most infectious grin. John was a momma’s boy that took care of all needs around her home. He loved to fish and grill and was an excellent cook. John leaves to cherish his precious memories, his loving parents; Ella Mosley of Peoria; John (Mary) Mosley, Sr. of Leavenworth, KS; his companion, Tammy Shock of Chillicothe, IL; three sons, John Mosley, III of Sumter, SC, Brandon Sturgis of Peoria, IL and Tyler (Emma) Sturgis of Killeen, TX; five daughters, Alesha Mosley, Kayla Pankey and Tara Pankey all of Peoria, IL, Angela (Jesse) Foreman of Bloomington, IL and Haley (Blake Miller) Cooper of East Peoria, IL; four brothers, Joseph Blocker of Peoria, IL, Shamar Stacy of Galesburg, IL, Dashandi Graham of Milwaukee, WI; Theathria (Leah) Coney of Leavenworth, KS; five sisters, Brenda (Michael) Thomas, Patrise Sample, Roshanda Stacy all of Peoria, IL, Martha Stacy of Las Vegas, NV and Aquashantina Young of Overland Park, KS; 3 grandchildren, Aubrey Pankey, Ayce Parker and Addy Sturgis of Peoria, IL; his grandmother, Carrie Thompson of Chicago, IL and a host of nieces, nephews, other family and friends. He is preceded in death by his grandparents, Charlie and Martha Stacy and Curly B. Mosley. Funeral services will be held at 11 AM on Saturday, July 27, 2019 at Pentecostal Church of Jesus Christ with a visitation one-hour prior beginning at 10 AM where District Elder Henry Bolden, II is the Pastor. Elder WillIvory Maxison will officiate. Simons Mortuary has been entrusted with arrangements. Online condolences may be made at SimonsMortuary.com.

The family of Mr. John Edward Mosley Jr. created this Life Tributes page to make it easy to share your memories.

Send flowers to the Mosley family.