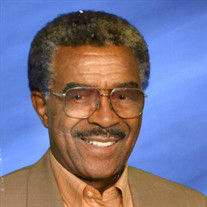 Mr. John Walton, 84, of Peoria, IL departed this life at 9:10 am on Sunday, May 12, 2019 at Heddington Oaks Nursing Home, West Peoria, IL. John was born on February 11, 1935 in Pensecola, Missouri to John Sr. and Annie (Bradley) Walton. He married Ella Rogan on March 28, 1953. She survives. John was a U.S. Army Veteran. By working on helicopter in the Army he discovered his ability to “fix thing with his hands”. He progressed to working on cars. John became an exceptional self-taught auto body repairman. He was self employed and the proud owner of B&W Auto Body for over 40 years. John was an avid bowler for 49 years. He rolled three 300 games, one 200 game and two 298 games. His high series was 748. John traveled and participated in numerous tournaments across the country. He was inducted in the Greater Peoria Bowling Association Hall of Fame in November 2005. Later in his life, John received Christ. He enjoyed attending church service in the nursing facility. John looked forward to taking communion no matter how bad he felt. John leaves to cherish his most precious memories, his wife Ella Walton of Peoria; two sons, Skott (Lori) Walton of Las Vegas, NV and Corey Walton of Minneapolis, MN; three daughters, Susan (Sherman) Carter of Tulsa, OK, Carla (Charles) Warr of Peoria, IL and Dawn (Kenneth) Hollis of Springfield, IL; 9 grandchildren; 12 great grandchildren; a host of nieces, nephews and cousins and a special and cherished friend, Billy Ambrose. He is preceded in death by his parents, two brothers, four sisters and three grandchildren. Funeral services will be held at 9:30 am on Tuesday, May 28, 2019 at Simons Mortuary Chapel with a one-half hour visitation beginning at 9 am. Bishop Joseph Johnson of Star of Hope Full Gospel Church, will officiate and his son, Mr. Skott Walton will bring forth the eulogy. John will be laid to rest at noon at Camp Butler National Cemetery, Springfield, IL. A special thank to all the caregivers who provided comfort to John: Natiya, Fay, Leatha, workers from Manor Care, Morton Terrace and Heddington Oaks. Finally, John Loved “his Cresha”! Simons Mortuary has been entrusted with arrangements. Online condolences may be made at SimonsMortuary.com.

The family of Mr. John Walton created this Life Tributes page to make it easy to share your memories.

Send flowers to the Walton family.