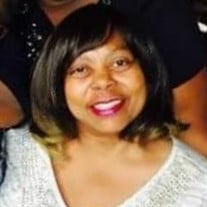 Mrs. Karen Sue Scott, 58, of Peoria, IL passed away peacefully at 4:03 PM on Saturday, June 23, 2018 at OSF Saint Francis Medical Center in Peoria, Illinois. Karen was born on August 20, 1959 in Peoria, Illinois to Lushion and Clara (Summers) Buckner. She married Billy D. Scott, Sr. on September 12, 1980. He preceded her in death on December 28, 2012, after 32 years of marriage. Karen was raised in Peoria, Illinois by her parents and she accepted Christ and was baptized at an early age. She attended Lincoln Elementary School and Peoria High School in Peoria, Illinois. Karen had an outstanding work ethic. She often worked part-time in the evenings cleaning offices with her husband. Karen worked with the Catholic Charities Foster Parent program working with prospective and new foster parents, fostering many children for several years, eventually adopting two sons. She worked for Peoria District 150 as a bus driver for over 15 years, retiring in December 2017. Karen sang in various choirs at Mt. Zion beginning with the Choraliers under the direction of Mrs. Alva Phillips. She had a soft soprano voice and sang in the Youth Choir and Young Adult choirs. Karen loved to cook, often cooking for the less fortunate and homeless as she and her sisters helped their father prepare holiday meals for the seniors at the church. While growing up in Mt. Zion, she served on the Junior Usher Board. Karen loved spending time with her family, with gardening being one of her favorite past times with her father. Both Karen and Billy were avid bowlers and loved animals. She and her family enjoyed taking vacations traveling to the South where she and her husband often spoke of relocating after retiring. She was proud of her children and grandchildren as the family grew. Karen leaves to cherish her most precious memories her sons; Billy Scott, Jr. and Rico Scott of Peoria; and Marcus Scott, of Aurora, Illinois, the daughter she raised, LaToya Murray of Peoria, Illinois; three sisters, Cynthia (Ricky Sr.) Johnson, Sandra Evans and Cecilia “CC” Buckner; 11 grandchildren and a host of nieces, nephews, cousins, other relatives and friends. She is also preceded in death by her parents, her husband, two infant children and grandparents. Funeral services will be held at 11 am on Friday, June 29, 2018 at Mt. Zion Missionary Baptist Church, with a visitation beginning an hour prior at 10 am. Pastor Alphonso Lyons, Jr. will officiate. Simons Mortuary has been entrusted with arrangements. Online condolences may be made at SimonsMortuary.com.

The family of Mrs. Karen Sue (Buckner) Scott created this Life Tributes page to make it easy to share your memories.

Send flowers to the Scott family.