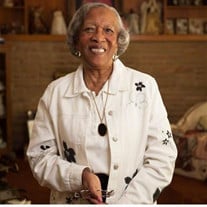 She was dedicated to giving as if it were a job, but it was a job she enjoyed…one from which she never retired…she was tireless. Mrs. Kathryn Williams Timmes, 88, of Peoria, IL transitioned from this life to her heavenly home at 7:08 PM on Tuesday, October 8, 2019 at OSF St. Francis Medical Center. Kathryn was born January 10, 1931, in Ashland, Kentucky, to the union of Almira and Willie Williams. She was an only child, raised by parents and grandparents who were committed to instilling in her a life with strong self-awareness, a sense of her purpose in the world, and the academic and common-sense tools to achieve her goals. She was a good student—completing her elementary education in Ashland, Kentucky public schools; high school at Swift Memorial Institute, a private boarding school run by the Presbyterian church in Rogersville, Tennessee; and her undergraduate education at Bennett College, an all-girls historically black college in Greensboro, North Carolina. Upon graduation, she began her career teaching fourth grade in New York City. After a few years in New York, the opportunity arose to move to Peoria, which she adopted as her new home for more than 60 years. Initially, she worked in early childhood education with children at Carver Center. After a year, she taught at Spalding Institute and the Academy of Our Lady, then began her 50-year career with District 150—dedicating her life to children through teaching at Douglas Elementary and counseling at Manual and Woodruff High Schools. Generations of young people came to know “Miss Timmes” as teacher, mentor, advisor, and adopted mom. Always humbled by recognition, she gave, then gave more to causes for children, seniors, and women. Upon entering the warm and inviting kitchen in her home, her closest friends often joked about her refrigerator door—wallpapered from handle to hinge with photos of former students’ babies. Kathryn led a fulfilling life over her 88 years. She met the love of her life, John Timmes, and they were married for 59 years until his death in 2015. They were blessed with 2 daughters: Janique (Jan, who preceded her in death) and Johnna. Johnna was her light…they never went a day without talking and sharing their lives, they enjoyed the closest of mother-daughter bonds. Although she held many professional accomplishments, her greatest pride and joy was her role as loving wife, mother, and daughter. Kathryn’s social and community involvement included being the first president of the Heritage Ensemble and a charter member of Delta Sigma Theta Sorority, Inc., Peoria Alumnae Chapter. In addition to family and community, Kathryn shared a strong sisterhood with her closest friends. The relationship between these “sisters” extended beyond generations to their children and ultimately to some grandchildren. She leaves to mourn her daughter Johnna, her closest sister-girlfriend Jeanne St. Julian, and a host of extended family members, church members, neighbors, friends, former students, and colleagues. Her memory, we cherish. A two-hour visitation will be held Friday, October 18, 2019 from 5 PM to 7 PM at Bethel United Methodist Church at 210 North Richard Pryor Place, Peoria, IL 61605. Funeral services will be held at 11 AM, Saturday, October 19, 2019 at Bethel United Methodist Church with a two-hour visitation prior to the Funeral service beginning at 9 AM. Pastor Tyson Parks, III will officiate. During the Saturday visitation, The Peoria Alumnae Chapter of Delta Sigma Theta will render the Omega Omega Ceremony commencing at 9 AM until 9:45 AM. The ceremony is open to the public. After the funeral service, a Private Interment will be held at Historic Springdale Cemetery where Kathryn will be laid to rest. In lieu of flowers, Memorial donations may be made in honor of Kathryn W. Timmes to either the Peoria Tri-County Urban League’s TSTM Program or to the Bethel United Methodist Church’s Outreach. Simons Mortuary has been entrusted with arrangements. Online condolences may be made at simonsmortuary.com.

She was dedicated to giving as if it were a job, but it was a job she enjoyed&#8230;one from which she never retired&#8230;she was tireless. Mrs. Kathryn Williams Timmes, 88, of Peoria, IL transitioned from this life to her heavenly home at... View Obituary & Service Information

The family of Mrs. Kathryn W. Timmes created this Life Tributes page to make it easy to share your memories.

She was dedicated to giving as if it were a job, but it was a...

Send flowers to the Timmes family.