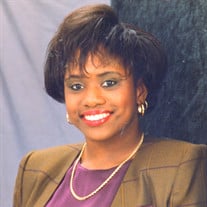 Mrs. Kelly Ruth Cornish-Robbins, 52, of Plainfield, IL (formerly of Peoria) passed away peacefully on Wednesday, January 23, 2019 surrounded by her family and friends. Kelly was born on April 23, 1966 in Peoria, IL to Herman and Dr. Dorothy Cornish. She was a 1984 graduate of Bergan High School and received her bachelor’s degree in Journalism from Bradley University in 1988. While at Bradley she became a member of Delta Sigma Theta Sorority, Inc., Theta Epsilon Chapter in 1987. She later joined the Peoria Alumnae Chapter. Kelly entered into holy matrimony with the love of her life, Deron Robbins in May of 1995. To this union two sons and one daughter were born, Noah, Nicholas and Kristian Robbins. She was a dedicated wife, mother and friend who loved life to the fullest. Kelly had an impressive career working for many years at State Farm where she was instrumental in developing the Summer Internship Program. Because of her passion for this program and mentorship, many youths were afforded employment opportunities. She ended her work career at Wells Fargo. From 1998 through 2004, Kelly served as a faithful volunteer on the Peoria Tri-County Urban League’s Board of Directors, in addition to participating in the Tomorrow’s Scientists Technicians and Managers (TSTM) Program over the years. Kelly was a founding volunteer at WXRJ, 94.9 FM, in Bloomington, IL where she was truly loved and respected. Kelly leaves to cherish her most precious memory her husband of 23 years, Deron Robbins; children, Noah, Nicholas and Kristian all of Plainfield; one brother, Kenneth (Veara) Cornish of Peoria; one sister, Janet (George) Cornish-Davis of Peoria; uncle and aunt, Loren and Frances Cornish of Peoria; and a host of nieces, nephews, cousins, other family and friends. She is preceded in death by her parents; paternal grandparents, John and Etta Green, paternal grandparents, William and Clara Cornish. A visitation will be held on Friday, February 1, 2019 from 4 PM - 8 PM at The Healy Chapel, 332 W. Downer Place, Aurora, IL 60506. An Omega Omega Ceremony facilitated by Delta Sigma Theta Sorority, Inc., will be held at 9:30 A.M Saturday, February 2, 2019 at Progressive Baptist Church, 275 Barnes Road, Aurora, IL 60506 with funeral services immediately following at 10:30 AM. Kelly will be laid to rest at Oakridge Cemetery, 4301 Roosevelt Road, Hillside, Illinois. Healy Chapel has been entrusted with arrangements. Online condolences may be made at simonsmortuary.com.

Mrs. Kelly Ruth Cornish-Robbins, 52, of Plainfield, IL (formerly of Peoria) passed away peacefully on Wednesday, January 23, 2019 surrounded by her family and friends. Kelly was born on April 23, 1966 in Peoria, IL to Herman and Dr. Dorothy... View Obituary & Service Information

The family of Mrs. Kelly Ruth Cornish-Robbins created this Life Tributes page to make it easy to share your memories.

Send flowers to the Cornish-Robbins family.