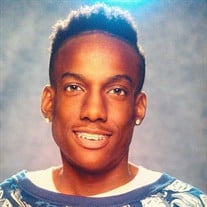 Mr. Kenneth Marice Ward, III, 19, of Peoria, IL passed away at 9:37 pm on Saturday, October 21, 2017 at Sullivan University in Louisville, KY. Kenneth was born on January 17, 1998 in Peoria to Ebony Pickett and Kenneth Ward, Jr. He was a 2016 graduate of Peoria Central High School where he excelled in culinary arts. Kenneth accepted Christ at an early age. To many it may seem Kenneth had a short life; but in those years, he lived to give the glory to God. His great faith led him to become a Missionary traveling to many states proclaiming the Gospel of Jesus Christ and helping others. Kenneth was a faithful member of St. Paul Baptist Church where he was a youth change agent for Christ and a Youth For Christ counselor. Kenneth was also very active in the Peoria Community as a member of the Elite Program and the Integrity Gospel Singers. At the time of his death, he was a senior at the National Center for Hospitality of Studies as a Culinary Arts student at Sullivan University in Louisville, KY. Kenneth leaves to cherish his most precious memories his loving and devoted mother, Ebony (Gregory) Pickett Chapman of Peoria; his father, Kenneth M. Ward, Jr., of Peoria; three brothers, Martin McLain, Isaiah Chapman and Noah Chapman all of Peoria; six sisters, Hayden Chapman Pickett, Hannah Chapman, Haley Chapman, Hollie Chapman and Kennedy Ward all of Peoria and Tiffany Ward of New York; grandparents, Pizzarro and Terri Pickett and Charles David Chapman of Peoria; great grandparents, Marlene and Willie Ross and Marianne Ward; and a host of other relatives and friends who also loved Kenneth. He is preceded in death by his grandparents Kenneth, Sr. and Vanessa Ward and Marsha Chapman, great grandparent, Retha Jones; and a special aunt, April Ross. Funeral services will be held at 10 am, Saturday, October 28, 2017 at St. Paul Baptist Church with a visitation at 9 am. Pastor Deveraux Hubbard will officiate and Pastor Quintin Redd of Leonard Missionary Baptist Church of St. Louis, MO will bring the eulogy. Kenneth will be laid to rest at Lutheran Cemetery. Simons Mortuary has been entrusted with arrangements. Online condolences may be made at simonsmortuary.com.

Mr. Kenneth Marice Ward, III, 19, of Peoria, IL passed away at 9:37 pm on Saturday, October 21, 2017 at Sullivan University in Louisville, KY. Kenneth was born on January 17, 1998 in Peoria to Ebony Pickett and Kenneth Ward, Jr. He was... View Obituary & Service Information

The family of Mr. Kenneth "Poohder" Ward III created this Life Tributes page to make it easy to share your memories.

Send flowers to the Ward family.