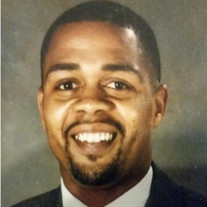 Mr. Lance Everett Blake, 54, of Peoria Illinois transitioned to his heavenly home at 6:32 PM Monday April 22, 2019 at OSF St. Francis Medical Center. Lance was born in Peoria, Illinois to Wilbur L. Blake and Effie (Gerald) Blake on February 11, 1965. He was a loving and involved father who leaves to cherish his precious memories, his mother, Effie Blake of Peoria; two sons, Kyrus Blake and Bryson Blake both of Peoria, IL; seven daughters, Londonn Blake of Champaign, IL, Mercedes Wheeler of Memphis, TN, Samantha (Kwame) Lobdell of Peoria, Kennidi Slaughter of St. Charles, MO, A’lyssa Blake of Peoria, Tedriuna Smith of Memphis, TN and Valancia Bland of Peoria; four grandchildren with one on the way, Kwame Lobdell, Jr., Kalise Lobdell, Kwincy Lobdell and Kayle Slaughter. Lance also leaves behind four brothers, David Blake, Victor Blake, Cortez (Valerie) Blake and Wilbur Blake all of Peoria; six sisters, Joyce Lee of Peoria, Judy (Alphonso) Taylor of Hazelwood, MO, Marsha (Donald) Kelley of Black Jack, MO, Sara (John) Sutton of Peoria, Donyel (John) Johnson of Florissant, MO and Valerie (Kenneth) Scott of Peoria; and a host of nieces, nephews, cousins, and friends that loved him dearly. Lance was preceded in death by his Father, one daughter, Erica Blake, and one brother, Gary Blake. Lance attended Woodruff High School graduating in 1983. He was a star athlete who was later inducted into Peoria Woodruff's Track Hall of Fame for his participation in the mile relay. Lance was also known for his rap skills and his infamous dance skills, including the spider, which he performed for Kirk Franklin. Lance was also a persuasive salesman who could resale you your own shirt off your back. Lance was very outspoken, entertaining and full of life. He is the only person that could make you laugh and cry at the same time. You will always be missed, Gym Shoe. Funeral services will be held at 11 AM on Tuesday, April 30, 2019 at Peoria Friendship M.B. Church with a visitation one-hour prior beginning at 10 AM. Rev. Dr. Claude Russell, Jr., Pastor, will officiate. Simons Mortuary has been entrusted with arrangements. Online condolences may be made at simonsmortuary.com. “For I know the plans I have for you” declares the Lord, “plans to prosper you and not to harm you, plans to give you hope and a future” -Jeremiah 29:11

The family of Mr. Lance Everett Blake created this Life Tributes page to make it easy to share your memories.

Send flowers to the Blake family.