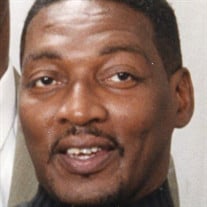 Mr. Lee “Ed” Edward Jackson, 64 of Houston, Texas (formerly of Peoria, Illinois) passed away May 10, 2017 at Memorial Hermann Hospital in Houston, TX. Ed, as he was affectionately known, was born on October 28, 1952 in Cruger, Mississippi to Jimmie and Legertha (Ross) Jackson. He accepted Christ as his savior as a teenager at St. Paul Baptist Church in Peoria, IL. Ed is survived by his wife, Hiawatha (Johnson) Jackson, three sons Andre Moszee of Urbana, IL, Omar Johnson, Isaac Jackson and one daughter, Octavia Johnson all of Houston, six grandchildren, two brothers Ray Jackson, Craig Jackson of Peoria, four sisters Denise Jackson of Peoria, Janice Hightower and Sherry Beatty both of Houston, Cheryl Jackson of Los Angeles, CA, a host of nieces, nephews and relatives. Ed is preceded in death by his parents and one brother, Leon Jackson. He attended Peoria Public Schools and graduated from Manual High School in 1971. Ed completed a sheet metal apprentice program and worked for more than 40 years as a journeyman. His job eventually sent him to work in Houston, Texas where he retired in October 2014. Ed was a very active member at Houston Praise and Worship Center Church where he served as Deacon, Trustee and Sunday school teacher. He loved his church and interacting with people and loved visits to Peoria where he would meet with old friends. A funeral service will be held at 11 am, Monday, May 22, 2017 at Church of the Living God, Temple 130 with a visitation at 10 am. Host Pastor Vice Chief Bishop Leroy Smith. Rev. Johnny Cooper, Pastor of Macedonia Baptist Church, Sterling, IL, is the eulogist. Lee will be laid to rest at Lutheran Cemetery. Simons Mortuary has been entrusted with arrangements. Online condolences may be made at simonsmortuary.com.

The family of Mr. Lee "Ed" Edward Jackson created this Life Tributes page to make it easy to share your memories.