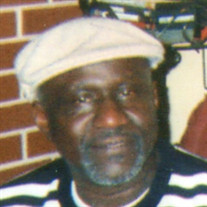 Mr. Lee "Boogie Down" Vester Harris, 66, of Peoria, IL passed away at 2:23 am on Sunday, January 21, 2018 at UnityPoint Health Methodist. Lee was born on November 14, 1951 in Greenwood, MS to Benjamin and Mammie (Branch) Harris. Lee grew up in Mississippi with 11 siblings. It was there he garnered his hard work ethic. Not only was he a hard worker, he was a great provider for his family. Lee was athletic. He was back catcher for Long John’s softball team where he wore the #0. He attended all games played by his children, especially “BJ”s, where he would scream “run that ball “BJ”!!!!. Lee was a very sociable person and everyone loved him. He was given the nickname “Boogie Down” by his dear friend, Peter Stanley. Lee dearly loved his whole family especially his children and grandchildren. Lee’s favorite pastime was eating. He was a roofer at Kreiling Roofing for many years and was a member of the Labor Union Local 69. Lee leaves to cherish his most precious memories his lifelong companion, Gwendolyn Henderson of Peoria; his three sons, Jarvis (Angel) Henderson of Leander, TX, Benjamin “BJ” Harris of Baton Rouge, LA; and Terrance Henderson of Denver, CO; three daughters, Daryl Strong and Jessica Harris both of Peoria and Quenesha Harris of Jacksonville, FL; one brother, Willie (Mary Pearl) Harris of Chicago, IL; four sisters, Mandella Moore of Peoria, Catherine Brown of Indianapolis, IN, Corine (Robert) Daniels of Chicago, IL and Annie Jones of Austin, TX; 8 grandchildren; 1 great grandchild and a host of nieces, nephews, cousins, other relatives and friends who adored Lee. He is also preceded in death by his parents and four brothers, Robert Branch, JC Harris, Bennie Harris and Roy Chester Harris; two sisters, Maggie Hudgins and Lula Totten. Funeral services will be held at 12:00 Noon on Saturday, January 27, 2018 at Pentecostal Church of Jesus Christ with a visitation beginning at 11 am. Host Pastor Bishop Henry Bolden, II will officiate. Rev. Robert Branch, Pastor of Bethel M.B Church in Wallis, MS will bring the eulogy. Lee will be laid to rest at Hudson Park Cemetery in Greenwood, MS. Simons Mortuary has been entrusted with arrangements. Online condolences may be made at SimonsMortuary.com.

Mr. Lee "Boogie Down" Vester Harris, 66, of Peoria, IL passed away at 2:23 am on Sunday, January 21, 2018 at UnityPoint Health Methodist. Lee was born on November 14, 1951 in Greenwood, MS to Benjamin and Mammie (Branch) Harris. Lee grew up... View Obituary & Service Information

The family of Mr. Lee Vester "Boogie Down" Harris created this Life Tributes page to make it easy to share your memories.

Send flowers to the Harris family.