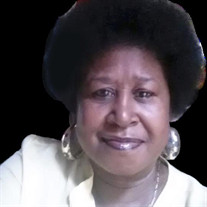 Mrs. LeJune (Smith) Kimbrough, 67, of Blue Island, IL; formerly of Peoria, Illinois transitioned from this life to her heavenly home at 7:15 AM Friday, December 27, 2019 in Gary, Indiana at her daughter’s home. Ms. LeJune was born on January 13, 1952 in Chicago, IL to Rosie Lee (MacDonald) Kimbrough and George Smith Sr. She was one of fourteen children. LeJune attended Peoria Public Schools in her early years. Later LeJune decided to return to school and finish what she had started. She returned to school and received her associate’s degree in psychology in 2001. LeJune accepted Christ at an early age. She was a member of New Cornerstone Baptist Church and was a member of the choir. She loved singing and ministered through song. LeJune was a songbird. She and her sister Arnita would sing so beautifully that you’d think the Heavens had opened up and the Angels were singing. LeJune was a homemaker for many years; taking care of her family and other relatives and friends. She married Arthur Kimbrough in 1975 and remained married until his death in 1985. She loved unconditionally and will be remembered for her kind heart, witty humor, and compassion towards others. LeJune leaves to cherish her precious memories her loving and devoted family consisting of two sons; Phillip (Lori) Smith of Blue Island, IL and Sheldon Butler of Detroit, MI; two daughters, Celia Daniels of Detroit, MI, and Tamara Kimbrough (Kevin Stephens) of Gary, IN; three brothers, Charles (Sharlon) Smith of Chicago, IL, Ronnie Smith of Peoria, IL and William Malone; six sisters, Dorothy (Omar) Moore, Arnita Smith, Brenda McDowell, Evet Malone, Tonet Malone all of Peoria, IL, and Deanna Malone of Gary, IN; a host of grandchildren and great grandchildren, cousins, many special friends; and her beloved family at New Cornerstone Baptist Church. Her parents, grandparents Essie Johnson and Grant McDonald, two brothers, George and Michael Smith, and two sisters, Beverly Dillard and Kathleen Carter, preceded her in death. Funeral services will be held at 11 AM on Friday, January 10, 2020 at New Cornerstone Baptist Church with a visitation beginning 10 AM. Rev. Dr. Mark A. McConnell, Pastor, will officiate. Simons Mortuary has been entrusted with arrangements. Online condolences may be made at SimonsMortuary.com.

Mrs. LeJune (Smith) Kimbrough, 67, of Blue Island, IL; formerly of Peoria, Illinois transitioned from this life to her heavenly home at 7:15 AM Friday, December 27, 2019 in Gary, Indiana at her daughter&#8217;s home. Ms. LeJune was born on... View Obituary & Service Information

The family of Mrs. LeJune Smith Kimbrough created this Life Tributes page to make it easy to share your memories.

Send flowers to the Kimbrough family.