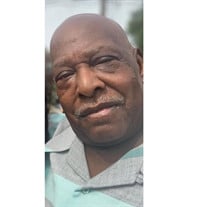 Mr. Leonard Carter, Sr., 71, of Peoria, IL, transitioned to his heavenly home at 1:30 pm on Sunday, January 2, 2022 at his residence. Leonard was born on May 20, 1949 in Chicago, IL to Frank and Alberta (Carr) Carter. He married the love of his life, Sandra Parker. Leonard Cab Driver for Parker & Honeywell. He was a fantastic father and a great man. Leonard loved helping people. He like having fun and live entertainment. Leonard was a great sportsman who liked to fish and hunt. He was a carpenter who loved to make things look beautiful. Leonard was a very religious man, who especially liked to listen to the gospel songs his mother Mark sang. He enjoyed visiting with his children, siblings and friends. Leonard leaves to cherish his precious memories, two sons, Leonard Carter, Jr of Lima, OH and Leonard Townsend of Indianapolis, IN; one daughter, Rochelle Carter and Darnell Carter both of Chicago, IL; two brothers, Mark Carter of Peoria, IL and Brad Carter of Chicago, IL; four sisters, Belinda Carter, Cherry Carter, Doris Carter all of Chicago, IL and Tonya Carter of Vernon Hills, IL; one granddaughter, Dizyre Funches; one great grandson, Sicari Williams and a host of nieces, nephews, cousins, other relatives and friends. He is preceded in death by his parents, his wife one son, Edward Townsend and four brothers, Clint Carter, Louis Carter, Dwight Carter and Aaron Carter. A memorial service will be held at a later date. Simons Mortuary has been entrusted with arrangements. Online condolences may be made at SimonsMortuary.com.

The family of Mr. Leonard Carter Sr. created this Life Tributes page to make it easy to share your memories.

Send flowers to the Carter family.