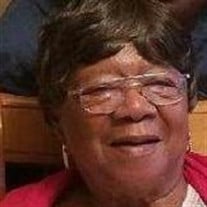 Ms. Lillie Beatrice Davies, 94, of Peoria, IL transitioned from this life to her heavenly home at 1:58 AM on Thursday, August 22, 2019 at OSF Richard L. Owens Hospice in Peoria, IL. Mother Lillie was born on October 6, 1924 in Newport, AR to Percy and Carrie (Price) Williams. She married Obra Davies on December 19, 1953 in Peoria, IL. He preceded her in death on May 2003. Mother Lillie moved to Peoria 1949 where she attended Nursing school at St. Francis. She retired as a nurse at Proctor Hospital where she was one of the original Proctor Girls. Mother Lillie was a longtime faithful member of St. Paul AME Church in Newport, AR where she was the church secretary and member of the WMS (Women’s Missionary Society). She was a long time and faithful member of Ward Chapel AME, Peoria, IL where she was an Usher, member of WMS and a Stewardess. She was the oldest living female member of Ward Chapel AME church. She was in the Foster Grandparent program with PCCEO in Peoria, IL. She was also a Foster Grandparent in Newport, AR. She was a faithful member of the Mother’s Club in the 70’s and 80’s. She was a very loving, friendly and outgoing Christian women. Mother Lillie leaves to cherish her most precious memories her loving daughters, Tina Davies and Lisa (Aaron) Kelly both of Peoria, IL; six grandchildren, Andreas (Tera) Davies, Sr., of Dallas, TX, Landon (Shannon) Davies of Round Rock, TX, Takia Davies, Kendrick Davies, Mycole Slater and Terrence Slater all of Peoria, IL; 27 great grandchildren; 1 great-great-grandson; her caregiver and niece, Janice McNeil of Peoria, IL and a host of nieces, nephews, other relatives and friends. She is preceded in death by her parents; husband; one brother, Eddie Williams; three sisters, Percy Lee Shannon, Mildred Williams and Fannie Lou Williams. Funeral services will be held at 3 PM, Sunday, September 1, 2019 at the Ward Chapel AME Church with a visitation one-hour prior at 2 PM. Pastor Adrian Johnson will officiate and Rev Arthur Williams, Sr. with bring forth the eulogy. Funeral services will be also held at 11 AM on Saturday, September 7, 2019 at St. Paul AME Church in Newport, AR with a visitation one-hour prior at 10 AM. Pastor Kevin Clark, Sr. will officiate. Mother Lillie will be laid to rest at Gum Grove Cemetery, Newport, AR. Simons Mortuary, Peoria, IL and Tolerson & Sons Funeral Home, Newport, AR has been entrusted with arrangements. Online condolences may be made at SimonsMortuary.com.

Ms. Lillie Beatrice Davies, 94, of Peoria, IL transitioned from this life to her heavenly home at 1:58 AM on Thursday, August 22, 2019 at OSF Richard L. Owens Hospice in Peoria, IL. Mother Lillie was born on October 6, 1924 in Newport, AR to... View Obituary & Service Information

The family of Ms. Lillie Beatrice Davies created this Life Tributes page to make it easy to share your memories.

Send flowers to the Davies family.