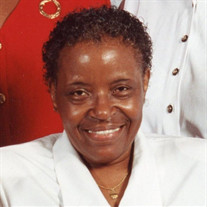 Mamie Jackson-Bey, 79, of Peoria, IL passed away peacefully at 1:55 pm on Tuesday, March 6, 2018 at Kindred Hospital. Mamie was a Moorish American National. She was born Mamie Jackson on November 13, 1938 in Drew, MS to Albert, Sr., and Maggie (Liston) Jackson. She was raised and educated in Mississippi and moved to Peoria where she worked as a materials handler at Caterpillar. She retired from Caterpillar in 1997 after many years of service. Mamie’s son, Malik, refers to his mom as “Wonder Woman”, because she could work a 12 hour shift, keep the best lawn on her block, a spotless home and care for her younger siblings and her only son as a single parent. Mamie was a devoted Christian woman. She was the most loving, giving, and caring woman around; but very outspoken, humorous and strong minded. Mamie leaves to cherish her most precious memory her loving and devoted son, Malik Akiel Bey, ex rel. “Big” Mike Anthony Jackson of Peoria; four brothers, Eddie Jay Bey; formerly known as Eddie Jackson, John (Barbara) Jackson, Albert (Karen) Jackson, Jr., and Joe Lewis Jackson all of Peoria; three sisters, Maggie Jackson and Emily Estelle Jackson both of Peoria and Katherine Winston of Jackson, MS; three grandchildren, Makis Amir Jackson, Mieka Cymone Jackson and Khali Amaan Jackson; and a host of nieces, nephews, other relatives and friends. She is preceded in death by her parents and two sisters, Lillie Mae House and Dora Jean Jackson and three brothers, Jimmy Lee Jackson, TJ Jackson and Malcolm Jackson. A funeral service will be held at 11 am on Friday, March 16, 2018 at Pentecostal Church of Jesus Christ with a visitation beginning at 10 am. Pastor Henry Bolden, II will officiate. Noblewoman Jackson-Bey will be laid to rest at Lutheran Cemetery. Simons Mortuary has been entrusted with arrangements. Online condolences may be made at simonsmortuary.com.

Mamie Jackson-Bey, 79, of Peoria, IL passed away peacefully at 1:55 pm on Tuesday, March 6, 2018 at Kindred Hospital. Mamie was a Moorish American National. She was born Mamie Jackson on November 13, 1938 in Drew, MS to Albert, Sr., and... View Obituary & Service Information

The family of Ms. Mamie Jackson-Bey created this Life Tributes page to make it easy to share your memories.

Mamie Jackson-Bey, 79, of Peoria, IL passed away peacefully at...

Send flowers to the Jackson-Bey family.