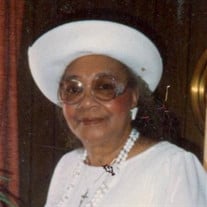 Mrs. Margaret (Bynum) Wade, 92, of Peoria, Illinois, passed away at 12:12 am on Wednesday, June 20, 2018 at Heddington Oaks Nursing Home, West Peoria, IL. Mother Wade was born September 10, 1925 in Charleston, MO to Sterling and Mattie (Coleman) Bynum. She married Henry Wade on April 29, 1951 and to that union three children were born. He preceded her in death on December 15, 1984 after 33 years of marriage. Mother Wade was a Past Worthy Matron, Past Associate Worthy Matron and Grad Queen of Sheba of Queen Beatrice Grand Chapter, Chicago, IL. She was a past member of Deborah Chapter #11 and Order of the Eastern Star Silver Star Chapter 74. She was a past member of the George Washington Carver Center Senior Club under the direction of the late Percy Baker. She was a faithful member of Grace Baptist Church under the leadership of the Late Pastor Jeffery Ivory, Sr., and served in many church positions over her many years at Grace Baptist Church. She served as Benevolent Committee Chairman, Missionary Department Chairman, Ministers and Deaconess Department and Citywide Mission. Mother Wade leaves to cherish her memory; one son, Charles (Jewette) Wade, Sr.; one daughter, Patricia Wade and one brother, James Bynum of all of Peoria; 6 grandchildren; 12 great-grandchildren; 31 great great-grandchildren and a host of nieces, nephews, other family and friends. She is also preceded in death by her parents; one daughter, Betty Jean Petty Costic; one granddaughter, Betty Jean Costic; one brother, Charles Bynum and one sister, Ellen Butler. Funeral services will be held at 10 am on Saturday, June 30, 2018 at Grace Baptist Church, with a visitation beginning an hour prior at 9:00 am. Pastor Claude White, Jr. will officiate and Rev. Jeffrey Foreman to bring the eulogy. Simons Mortuary has been entrusted with arrangements. Online condolences may be made at SimonsMortuary.com.

The family of Mother Margaret (Bynum) Wade created this Life Tributes page to make it easy to share your memories.

Send flowers to the Wade family.