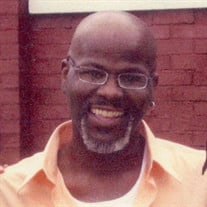 Mark A. Adams, 55, of Peoria, passed away peacefully Sunday, Sept. 3, 2017, at OSF Richard Owens Hospice Home. He was born Nov. 24, 1961, in Peoria to J.C. and Betty Porter Adams. Surviving are one daughter, Dominique Adams of Peoria; one son, Jordan C. Brown-Adams of Peoria; one granddaughter, Jordyn Adams-Hardin; his significant other, Alesia Wilkinson of Peoria; four sisters, Pam Adams, Jessica Williams, Portia Adams, all of Peoria, Tanya Adams of Schaumburg; and a large, extended family who loved him dearly. He was preceded in death by his parents, one brother, Charlie, and one sister, Gloria. He graduated from Manual High School in 1979, where he played on the 1975-77 football teams inducted into the Greater Peoria Sports Hall of Fame. He attended Triton College. He worked at Youth Farm many years, retiring as a coordinator as his muscular dystrophy progressed. Mark was strong in so many ways. As a weightlifter, his personal best was 500 pounds. As a brother, father, boyfriend and all-round good guy, he was loving, compassionate, and stubbornly independent. He had the kind of mischievous wit that turned problems to laughter and a gift for unearthing buried truths in a few choice words. Oh, and let us not forget the bar-be-que. Petey Pa, it's the best. Services will be at 11 a.m. Saturday, September 9, 2017 at Bethel United Methodist Church. Pastors Florene Scott and Al Ivy will officiate. Visitation will be at 10 a.m. at the church. Burial will be in Lutheran Cemetery. Simons Mortuary is in charge of arrangements. Online condolences may be made at SimonsMortuary.com. Memorials may be made to the Muscular Dystrophy Association.

Mark A. Adams, 55, of Peoria, passed away peacefully Sunday, Sept. 3, 2017, at OSF Richard Owens Hospice Home. He was born Nov. 24, 1961, in Peoria to J.C. and Betty Porter Adams. Surviving are one daughter, Dominique Adams of Peoria; one... View Obituary & Service Information

The family of Mr. Mark Anthony Adams created this Life Tributes page to make it easy to share your memories.

Send flowers to the Adams family.