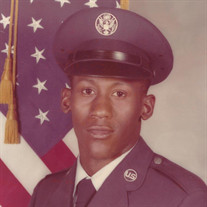 Mark “Klink” Anthony Crooks, 63, of Peoria, IL passed away at 6:30 pm on Sunday, May 17, 2020 at OSF St. Frances Medical Center. Mark was the youngest of twelve children born to Clarence James and Ada (Warmack) Crooks, Sr. He was a life long resident of Peoria where he was educated in the Peoria District 150 School System. He was a 1974 graduate of Manual High School where he was a track and field Star. Mark received a track scholarship to Western Illinois University where he attended. He also attended Illinois Central College. He worked as a Correctional Officer many years and later worked as a fork lift driver a contractor at Caterpillar Tractor, Inc., before a company downsizing took place. Shortly after the downsizing, Mark became ill and was unable to go back to work. Later he would do volunteer work for Mt. Zion Baptist Church when he was able. Mark was a weekend warrior as a member of the 182 Air National Guard. While he was sometimes a rough talking person with his friends and family; he was basically a kind hearted person. He admired his older brothers, Zakee and Byron and often tried to emulate some of their behaviors. Mark was an avid reader. He also had a love for historical movies, board games, and spirited conversations with friends. He loved his family. Mark had a green thumb and love gardening and his plants. Mark is survived by his only child, Shakira Hayden of West Palm Beach, FL; seven grandchildren, Alexis, Toni, Tonya, Antonio, DeMario, Eric and Erica; 16 great grandchildren; two brothers, Shahid Zakee “Danny” Crooks of San Francisco, CA and Roger (Lourdes) Crooks of Panama City, FL; three sisters, Patricia Day of Hazel Crest, IL, Barbara (Cornell) Wright of Peoria, IL and Candice Crooks of Country Club Hills, IL; also surviving is Mark’s special friends, Gwendolyn Mullins; and a host of nieces, nephews, other relatives and friends. He is preceded in death by his parents; three brothers, Clarence Crooks, Jr., Walter Crooks and Byron Crooks and two sisters, Charlotte Crooks and Frances Hole. A private Funeral will be held at 12 noon, Thursday, May 28, 2020 at Simons Mortuary with a visitation one-hour prior beginning at 11 am. Pastor Alphonso Lyons, Jr., will bring words of comfort. The funeral service will be live streamed on Simons Mortuary's Facebook page at https://www.facebook.com/Simons-Mortuary-232095303487150/ Simons Mortuary has been entrusted with arrangements. Online condolences may be made at SimonsMortuary.com.

Send flowers to the Crooks family.