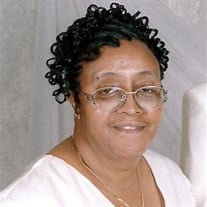 Mrs. Martha Lougene (Wyatt) Alexander, 77, formerly of Peoria, IL, passed from this life to her heavenly home on October 4, 2019 at her home in Aurora surrounded by her family. Martha was born November 2, 1941 in Davenport, IA to Harold Wyatt and Dorothy (Adams) Wyatt. She married Freddie Lee Alexander, Sr. on February 23, 1962 in Peoria, IL. They were happily married until his death in 2003. Martha attended and graduated from Peoria Manual High School. Martha confessed to Christ at an early age at Holy Tabernacle Church of God In Christ under the leadership of the Late Bishop Robert Criss, Sr. Martha was employed by Methodist Medical Center for 34 years; 29 years as a nurse’s assistant in the newborn nursery and five years as a phlebotomist before retiring in 1993. Over the years she enjoyed baking, cooking, attending church, crossword puzzles, crocheting, knitting, caring for and helping others and treasured her family and friends. She relocated to Aurora, IL in 2017 to live with her son Jerry Alexander and his wife DeVonyon. Martha leaves to cherish her memories three sons, Freddie Jr (Marjorie) Alexander, Dennis (Cree) Alexander of Peoria, Jerry (DeVonyon) Alexander of Aurora; two daughters, Michelle Alexander of Aurora, and Denise Alexander of Peoria; seven sisters, Carolyn Alexander, Victoria Barnett, Yvonne Wyatt, Antonia Cotton, Linda Walters, Kathy (Alvin) Vinson all of Peoria and Deborah Wyatt of Georgia; one brother, John (Carolyn) Wyatt of Mississippi; 19 grandchildren, 40 great grandchildren and a host of nieces, nephews, other family and friends. Martha was preceded in death by her husband, 5 brothers; Walter Wright, Roy Wyatt, Percy Wyatt, Rodman Wyatt and Tommy Wyatt and 1 sister, Rosetta Wyatt. Funeral services will be at 10 am on Saturday, October 12, 2019 at Greater City of Refuge Worship Cathedral with a visitation at 9 am. Bishop Timothy Criss will officiate. Martha will be laid to rest at Lutheran Cemetery. Simons Mortuary has been entrusted with arrangements. Online condolences may be made at SimonsMortuary.com.

Mrs. Martha Lougene (Wyatt) Alexander, 77, formerly of Peoria, IL, passed from this life to her heavenly home on October 4, 2019 at her home in Aurora surrounded by her family. Martha was born November 2, 1941 in Davenport, IA to Harold Wyatt... View Obituary & Service Information

The family of Mrs. Martha Lougene Alexander created this Life Tributes page to make it easy to share your memories.

Send flowers to the Alexander family.