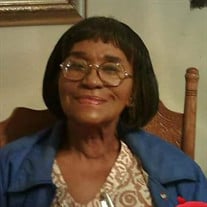 Mrs. Martha Ray (Kuni) Fleming was born June 14, 1926 in Myrtle, Mississippi to Allie Rutherford and Johnny Waldrop. On February 3, 2018 at 9:40 p.m. our Heavenly Father called her home. On September 4, 1943 she married the late Jessie Lee Fleming in Myrtle Mississippi. In 1954 the young couple and their three sons moved to Peoria, Illinois. She later joined Star of Hope Missionary Baptist Church under the leadership of Rev. Joseph Johnson. Martha was a very outgoing person. She loved her children and was crazy about her grandchildren. She was known for creative crocheted Afghans, making Cabbage Patch dolls, sewing, and loved driving you around if you needed a ride. If you knew anything about Kuni, she was "very outspoken!" Martha worked at St. Francis Hospital and Peoria Public School for many years. Martha is survived by her three daughters B. Brittany Benjamin of Sherman Oaks California, Linda Alabi of Saint Paul, MN, Laverne Flemming of Little Canada, MN., Kathleen Veil of Indianapolis, IN., and four sons; Johnnie Flemming of Peoria, IL, James (Charla) Flemming of Peoria, IL, Terry Lee Flemming ( Kristie) of Brooklyn Center, MN. and Anthony Flemming of Bloomington, MM. : a host of grandchildren and great grandchildren: two brothers Alvis (Corrine) Rutherford of Peoria, IL, Otis Rutherford of Blue Mountain Mississippi alone with a host of nieces and nephews. In addition to her parents Martha was preceded in death by her late husband Jessie Lee Fleming, son Jessie Alvis, one brother JD Rutherford, two sisters (twin sister) Willie Mae Pratt and Vella Rutherford. Funeral services will be at 10 am at Mt. Zion Baptist Church with a visitation one hour prior at 9 am. Host Pastor Alphonso Lyons, Jr. will officiate and Bishop Joseph Johnson of Star of Hope Full Gospel Church will bring the eulogy. Martha will be laid to rest at Parkview Cemetery. Simons Mortuary has been entrusted with arrangements. Online condolences may be made at SimonsMortuary.com.

The family of Mrs. Martha Ray Fleming created this Life Tributes page to make it easy to share your memories.

Send flowers to the Fleming family.