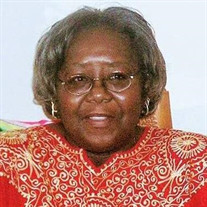 Mrs. Mary Arleen Elizabeth Galloway, 67, of Peoria, Ilinois passed away at 4:22 pm on Friday, May 4, 2018 at her residence. Mary was born on May 22, 1950 in Peoria, Illinois to Roosevelt Rusk and Mary (Majors) Palmer. She previously married Herman Howard and after his passing in November 8, 1989, she married Elijah Galloway on December 10, 1988 in Syracuse, New York. He passed away April 29, 2015. Mary attended Peoria Friendship Baptist Church in Peoria, Illinois before moving to Syracuse, NY in May of 1983. She worked as a TTY Translator for CSD Relay in Syracuse, NY. Mary was a former member of Second Olivet M.B. Church in Syracuse Baptist Church, Syracuse, NY where she sang in the choir and served at the church. She was a member of the International Order of Eastern Star where she was the Past Worthy Matron. Mary moved back to Peoria in 2014 to help take care of her grandmother and her aunt until their passing. Mary leaves to cherish her two sons, Derek (LaToya) Galloway and Franklin Galloway both of Syracuse, New York; two daughters, Jeu Knox of Brooklyn, New York and Latonya (David) Galloway-Slaughter of North Carolina; three brothers, John (Lina) Majors of Fife, Washington, Rodney (Heather) Davis of Beaverton, Oregon, Tony Camp of Antelope, California and Ahmed “Victor Palmer” (Rosamond) Shabazz of Syracuse, New York; one sister, Jennifer Rusk of Bloomington, Illinois; nine grandchildren; four great grandchildren and a host of nieces, nephews, other relatives and friends. She is preceded in death by her parents and one brother, James Camp. A Memorial service will be held at noon on Saturday, May 26, 2018 at Connected Christian Church, 107 E. Beard St., Syracuse, NY 13205 with a visitation one-hour prior beginning at 11 am. Senior Pastor Derek Galloway will officiate. Simons Mortuary has been entrusted with arrangements. Online condolences may be made at SimonsMortuary.com or email them to [email protected]

Mrs. Mary Arleen Elizabeth Galloway, 67, of Peoria, Ilinois passed away at 4:22 pm on Friday, May 4, 2018 at her residence. Mary was born on May 22, 1950 in Peoria, Illinois to Roosevelt Rusk and Mary (Majors) Palmer. She previously married... View Obituary & Service Information

The family of Mrs. Mary Arline Elizabeth Galloway created this Life Tributes page to make it easy to share your memories.

Send flowers to the Galloway family.