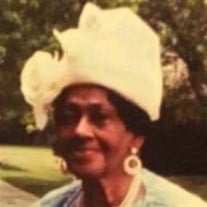 Mrs. Mattie Bell Buckner, 93, of Peoria, IL transitioned from this life to her heavenly home at 4:45 pm on Saturday, November 4, 2017 at her home surrounded by her family. Mother Mattie was born on September 18, 1924 in Lovejoy, IL to Sam and Leona (Crowder) Sumpter. She married the love of her life, William O’Neil Buckner, Sr., in 1952; he preceded her in death in 1985. Mattie had a passion for education and an awesome work ethic. Mattie became one of the first black women hired at Caterpillar, Inc., where she worked on the assembly line. The earnings she saved from CAT were used to pay for her college education. She graduated from Poro Beauty College in Chicago, IL where she was a licensed apprentice under Madame Malone. While owning and operating Buckner’s Beauty Shop, Mattie became a Psych Aid for State Hospital, working there for over 35 years. She later worked for Commercial National Bank where she retired in 1981 after many years of service. Mattie had a great love of music. She played the piano at many funerals and was the hair stylist at Goins Funeral Home and Simons Mortuary for years. She was also the pianist at her church, Zion Baptist, where she had been a member for over 70 years. Mother Mattie leaves to cherish her most precious memories her children; sons, Willie (Ludena) Buckner of Waldorf, MD, William O. (Thea) Buckner, Jr., of New Port News, VA, Keith Buckner of Peoria, Adair (Essie) Buckner of RiAlto, CA and Kevin Buckner of Peoria; daughters, Dorothy Buckner and Emel Buckner both of Peoria; 18 grandchildren; 24 great-grandchildren; a host of great-great grandchildren; nieces, nephews, other relatives and friends. She is also preceded in death by her parents; one son, Sam Whiterspoon; four brothers, Sonny Sumpter, Alonzo Sumpter, Eddie Sumpter and Bo Sumpter; three sisters, Emel Glover, Clara Johnson and Lula Jones; one granddaughter, Nina Buckner and one grandson, Christopher Buckner. Funeral services will be held at 10 am on Saturday, November 11, 2017 at Zion Baptist Church with a visitation one hour prior beginning at 9 am. Pastor Samuel Duren will officiate. Mother Mattie will be laid to rest at Lutheran Cemetery. Simons Mortuary has been entrusted with arrangements. Online condolences may be made at simonsmortuary.com.

Mrs. Mattie Bell Buckner, 93, of Peoria, IL transitioned from this life to her heavenly home at 4:45 pm on Saturday, November 4, 2017 at her home surrounded by her family. Mother Mattie was born on September 18, 1924 in Lovejoy, IL to... View Obituary & Service Information

The family of Mrs. Mattie Bell Buckner created this Life Tributes page to make it easy to share your memories.

Send flowers to the Buckner family.