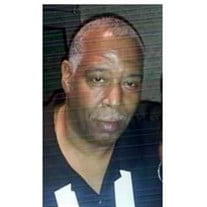 Mr. Michael “Big Mike” Duane Davis, 65, of Peoria, IL peacefully transitioned from this life at 8:15 PM on Thursday, October 24, 2019 at Kindred Hospital in Peoria, IL, surrounded by his beloved family. Big Mike was born on July 23, 1954 in Peoria, IL to Donna Davis and Walter Johnson. In his youth, he attended Webster Grade School. In 1972, he graduated from Manual High School where he was a star basketball player under the tutelage of Coach Dick Van Scyoc. Big Mike played basketball for Peoria’s own Bradley University and was a member of the 1975 Missouri Valley Conference Championship team. Mike was voted Bradley Braves’ Most Valuable Player in 1975, and again in 1976. Upon graduating in 1976 with his Bachelor’s Degree, Big Mike was drafted by the NBA’s Kansas City Omaha Kings. He later played for the Washington DC Metros of the Eastern Professional Basketball Association before signing with the Wilkes-Barre Barons, which was also a member of the Eastern Basketball Association (EBL) and the American Basketball League (ABL). Big Mike was a starter, leading scorer and Most Valuable Player of the 1977/1978 Wilkes-Barre Barons Championship team. Big Mike dedicated his life’s work to improving the lives of Peoria’s youth. His career path included the Youth Farm, Boys and Girls Club of America and Peoria District 150 at Blaine Sumner School. Big Mike leaves his family to cherish many precious memories, especially his daughter, April Williams of Peoria, IL; his sister, Charisse Davis of Peoria; four grandchildren, Ky, Nia, Jameela, and Niam “CeJay” all of Peoria, IL; three nephews Joshua, Jermaine and D’Andre Davis, for whom he was not only an uncle but a wonderful role model; and a host of nieces and nephews, six aunts, three uncles and other relatives and friends. He is preceded in death by his parents and one son, Saavon Davis. A Memorial Service/Celebration of Life will be held at 11 AM, Saturday, November 16, 2019 at New Morning Star M.B. Church, in the Calvin Hightower Youth Center with a visitation beginning at 10:30 AM. Pastor Cleveland Thomas, Sr., will officiate, and Bishop Leroy Smith will render special remarks. Big Mike donated his body to medical science.

The family of Mr. Michael "Big Mike" Duane Davis created this Life Tributes page to make it easy to share your memories.

Send flowers to the Davis family.