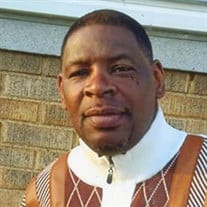 Mr. Michael Wayne Jackson, 49, of Peoria, IL passed away at 7:27 PM on Saturday, October 20, 2018 at OSF St. Francis Medical Center surrounded by his family. Michael was born on December 31, 1968 in Memphis, Tennessee to Isiah Harris and Annie Jackson. Michael was the family chef that loved cooking for his family and he also worked as a chef at Sous Kitchen. He was a Green Bay Packers football fan and loved playing pool and spending time with his family. Michael had a passion for his dog, Bentley. Michael leaves to cherish his most precious memories his loving mother, Annie Jackson of Peoria; three brothers, Patrick (Erika Gordon) Jackson of Peoria, Donald Harris and Henry Harris both of Lake Cormorant, MS; seven sisters, Linda (O.K.) Barnes, Arleatha Jackson, Cynthia Jackson all of Peoria, Patsy Jackson of Memphis, TN, Edna Harris, Jackie Harris, Dorothy Harris all of Lake Cormorant, MS; his special friend, Elaine Ashmore and a host of nieces, nephews, other relatives and friends. He is preceded in death by his father and niece, Monique Jackson. Funeral services will be held Saturday, October 27, 2018 at 10 AM at Sovereign Grace M.B. Church with a visitation to begin at 9 AM. Pastor Alvin Riley, Sr. will officiate. Michael will be laid to rest at Lutheran Cemetery. Simons Mortuary has been entrusted with arrangements. Online condolences may be made at simonsmortuary.com.

The family of Mr. Michael W. Jackson created this Life Tributes page to make it easy to share your memories.