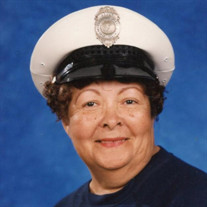 Mildred Virginia Teague, 93, of Peoria, IL passed away at 8:45 am on Tuesday, February 27, 2018 at Kindred Hospital. Mildred was born on April 15, 1924 in New Florence, Missouri to Elmer and Emily Luvenia (Stephenson) Bryant. Because of the Great Depression, her parents worked long days and nights. Not wanting Mildred to be home alone, they sent her to Peoria in 1937 to live with relatives. Mildred’s mother remarried a Rev. White in Missouri; thus, Mildred using the last name of White while attending school. While attending Church at St. Paul Baptist Church in Peoria, Mildred met her husband to be, Lonnie Teague, Jr. She graduated from Roosevelt High School. She married Lonnie Teague, Jr., August 3, 1940 and they were one of the first families to move into the Warner Homes. Lonnie preceded her in death in 2004, after 64 years of marriage. Mildred worked as a crossing guard for District 150 schools for 32 years where she received a plaque for dedicated services. Mildred also helped start the District 150 school Hot Lunch program. She was very active in the Peoria community serving with the Willing Workers Club, the Cornstock Theater, the Y.P.O. Youth program as Director and a seamstress at Magic Tailor. She was a member of Ward Chapel A. M.E for over 75 years where she sang in the Choir, was a Deaconess and served in the daughters of Allen Club. She also found time to be a foster parent to many many children from 1968-1996. Mildred was a grandmother to 5 generations of her family. She leaves to cherish her most precious memories one daughter, Khalisah (Hadrat) Najeebe of Houston, TX; one son, Robert Teague of Washington, IL; a grandson who was her caregiver, Richard Lee; and a host of other grandchildren and great grandchildren. She is also preceded by her parents and daughter, Lonsetta Green. Funeral services will be held at 11 am on Friday, March 9, 2018 at Ward Chapel A.M.E Church with a visitation beginning at 10 am. Pastor Adrian Johnson will officiate. Mildred will be laid to rest at Parkview Cemetery. Simons Mortuary has been entrusted with arrangements. Online condolences may be made at simonsmortuary.com.

Mildred Virginia Teague, 93, of Peoria, IL passed away at 8:45 am on Tuesday, February 27, 2018 at Kindred Hospital. Mildred was born on April 15, 1924 in New Florence, Missouri to Elmer and Emily Luvenia (Stephenson) Bryant. Because... View Obituary & Service Information

The family of Mrs. Mildred Virginia Teague created this Life Tributes page to make it easy to share your memories.

Send flowers to the Teague family.