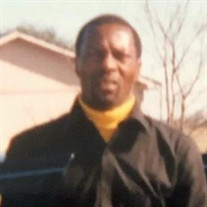 Mr. O’Neal Jones, Jr., 65, of Peoria, IL passed away on Sunday, January 23, 2022 at 5:40 pm at his home. O’Neal was born on May 10, 1956 in Memphis, TN to O’Neal, Sr. and Mary (Patterson) Jones. O’Neal moved to Mississippi, where he attended McEvans Elementary, Indianola Junior High School and Gentry High School graduating in 1974. He attended Alcorn State University in Lorman, MS. O’Neal later moved to Peoria, IL, where he enjoyed his passion for playing baseball with various leagues as a short stop. He loved watching the St. Louis Cardinals baseball team and the Pittsburg Steelers football team. O’Neal was employed at Norwood School as a school bus driver for years and Caterpillar for several years until he retired. He volunteered at PCCEO Webster Head Start until his health started to decline. O’Neal confessed his love for Christ at an early age at United Baptist Church in Mississippi. He renewed his relationship with Christ at Good Testimony Church, Peoria, IL, under the leadership of Pastor Melvin McAfee where he served on the Deacon Board. He was a faithful member until his health declined. O’Neal leaves to cherish his precious memories, three daughters, Latoyia Skinner and DeShana Lyles both of Peoria, IL and Nicole Jones of Houston, TX; three sons, Delando Skinner, Sr., and Pierre McGhee both of Peoria, IL, Kevin Elverton of Chicago, IL; three sisters, Doris Jones-Hodges of Cleveland, MS, Carol Jones and Sara (Larry) Thomas both of Memphis, TN; three brothers, Jessie Jones of Milwaukee, WI, Wayne Jones of Yazoo, MS and Tony (Tonya) Jones of South Haven, MS; a special friend, Carlyn Goodley; a special cousin, Theresa McAfee; 15 grandchildren, Jontaja Peyton, Kourtney Minor, Artaeveon Johnson, Symone Jones, Kendrea Bovan, Delando Skinner, Jr. Tatum Johnson, Myael McGhee, Shanavia McGhee and A’kerra McGhee all of Peoria, IL Makala Elverton, Kevin Elverton, Jr., Quintin Simmons, Layla Royal and Tommy Washington all of Chicago, IL and a host of nieces, nephews, other family and friends that loved him. He was preceded in death by his parents, grandparents, one daughter, YaShica Elverton and one grandchild, Kyndra Bovan. Funeral services will be held at 10 am on Saturday, February 5, 2022 at Mt. Moriah Baptist Church with a visitation at 9 am. Pastor Jimmie Burnside is the host pastor and Pastor Melvin McAfee of Good Testimony Church will officiate. O’Neal will be laid to rest at Lutheran Cemetery. Simons Mortuary has been entrusted with arrangements. Online condolences may be made at SimonsMortuary.com. The service will be live streamed on Simons Mortuary's Website or Facebook page at https://www.facebook.com/Simons-Mortuary-232095303487150 promptly AT THE TIME OF THE SERVICE. Due to Covid-19 restrictions, social distancing is encouraged to be consistent with recommendations from the National Funeral Directors Association (NFDA), funeral home directors have been instructed and should follow CDC guidelines on gatherings, including those directly related to funerals, visitations, or graveside services. *In an effort to mitigate the spread of COVID-19, we ask that everyone in attendance: wear a face mask and refrain from hugging, kissing and shaking hands (as hard as it is to see someone you care about and not touch them). *It is our responsibility as a Funeral Directors, to do everything we can to advise families in order to honor our beloved Families and to keep everyone as safe as possible. Thanks in advance for your cooperation!

Send flowers to the Jones family.