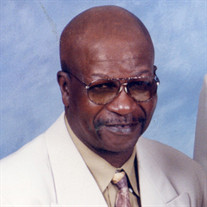 Mr. Ocie Douglas, 81, of Peoria, IL transitioned to his heavenly home at 5:46 PM on Wednesday, July 17, 2019 at OSF St. Francis Medical Center surrounded by his family. Ocie was born on December 9, 1937 in Alligator, MS to Earl and Jannie (Lee) Douglas. He married Pearline Franklin on August 16, 1978 in Peoria, IL Ocie worked for Caterpillar for many years retiring in 2000. Ocie was chief usher at Peoria Friendship Missionary Baptist Church where he had been a faithful member of over 30 years. He was dedicated to visiting the sick and afflicted at the hospital, nursing home or their home. Ocie was known as “Mr. Fix It” or he’d instruct someone to fix it! He was also known for his great baking skills, especially those delicious sweet potato pies! Ocie had many hobbies, gardening, working on cars, watching sports, grilling and cutting his grass. Ocie loved his family and just being with them. He was also a part-time baby sitter for his grandchildren. Ocie leaves to cherish his most precious memory his loving and devoted wife for over 40 years, Pearline Douglas of Peoria, IL; one son, M.C. Reed of Peoria; six daughters, Jannie (Robert) Jackson of Indianapolis, IN, Martha Jean Robertson of Clarksdale, MS, Linda Watkins of Peoria, IL, Brenda Douglas of Peoria, IL, Oceluah “Toni” (Chris) Tatum of Houston, TX and Cecily Douglas of Peoria, IL; Three brothers, Melvin (Marjorie) Douglas of Peoria, IL, Larry Douglas, Sr., of Huntsville, AL and Norman “Billy” (Sherry) Parish of Olive Branch, MS; 17 grandchildren; 26 great grandchildren; 7 great-great grandchildren; and a host of nieces, nephews, other family, friends and his Peoria Friendship Church family. He is preceded in death by his parents; two sons, Robert Douglas and O. D. Douglas; one daughter, Helen Mae Douglas; 5 brothers and a special aunt, Ms. Ida Bell Clark. Funeral services will be held at 10 AM on Saturday, July 27, 2019 at Peoria Friendship Missionary Baptist Church with a visitation one-hour prior beginning at 9 AM. Rev. Dr. Claude Russell, Jr., Pastor, will officiate. Simons Mortuary has been entrusted with arrangements. Online condolences may be made at SimonsMortuary.com.

Mr. Ocie Douglas, 81, of Peoria, IL transitioned to his heavenly home at 5:46 PM on Wednesday, July 17, 2019 at OSF St. Francis Medical Center surrounded by his family. Ocie was born on December 9, 1937 in Alligator, MS to Earl and Jannie (Lee)... View Obituary & Service Information

The family of Mr. Ocie Douglas created this Life Tributes page to make it easy to share your memories.

Mr. Ocie Douglas, 81, of Peoria, IL transitioned to his heavenly...

Send flowers to the Douglas family.