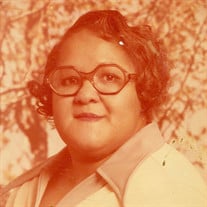 Mrs. Ophelia Madison, 83, of Peoria, IL transitioned from this life to her heavenly home at 5:40 am on Sunday, October 3, 2021 at River Crossing Healthcare Center in Peoria, IL. Ophelia was born on November 24, 1937 in Rich, Mississippi to Lena Bell Turner and Johnnie Washington. Ophelia was raised by her mother, Lena and step-father, Joe Eggerson. She married Daniel Madison; he preceded her in death. Ophelia was in every sense of the word, a Homemaker. She loved and took great care of her family. Her meals were made with love and will truly be missed. Ophelia was a faithful member of Prince of Peace M.B. Church until her health failed. Ophelia leaves to cherish her most precious memory her loving and devoted family which consists of two daughters, Annie Ruth Carter of Peoria, IL and Ida (Sammie) Terrell of Memphis, TN; one son, Joe (Fay) Patterson of Gulf Port, MS; four step-children, Mary Nickelberry, Welton Ray, Anderson Madison and Sheryl Hill all of Memphis, TN; 13 grandchildren; a host of great and great-great-grandchildren; a special aunt who was raised with Ophelia like a sister, Annie Bell Wicks; and a host of nieces, nephews, other relatives and friends. She is also preceded in death by her parents; two children, Ella Jane Atkins and Mary Jane Atkins; a son-n-law, PeArthur Carter and a great-great granddaughter. Funeral services will be held at MJ Edwards Funeral Home 5494 Elvis Presley Blvd, in Memphis, TN on October 16, 2021. Ophelia will be laid to rest at Greenview Cemetery in Nesbit, MS. Simons Mortuary has been entrusted with local arrangements. MJ Edwards entrusted with arrangements in Memphis, TN.

Mrs. Ophelia Madison, 83, of Peoria, IL transitioned from this life to her heavenly home at 5:40 am on Sunday, October 3, 2021 at River Crossing Healthcare Center in Peoria, IL. Ophelia was born on November 24, 1937 in Rich, Mississippi to... View Obituary & Service Information

The family of Mrs. Ophelia Madison created this Life Tributes page to make it easy to share your memories.

Mrs. Ophelia Madison, 83, of Peoria, IL transitioned from this...

Send flowers to the Madison family.