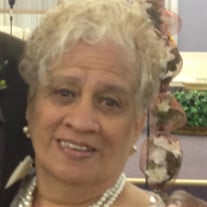 Mrs. Patricia Mae O’Neal, 79, of Peoria, IL transitioned peacefully at 11:17 AM on Sunday, October 21, 2018 at her home surrounded by her family. Patricia was born in Pontiac, MI to Henry Melvin and Letha Mae (Ford) Harper. During her formative years, Mr. Harper moved the family to Peoria to begin a job as Director of George Washington Carver Center. Patricia was a 1957 graduate of Manual High School where she met her high school sweetheart, Wiley Lee O’Neal, Jr. She married Wiley on June 11, 1960. They were married 57 years when he passed away on January 9, 2018. Patricia was a loving and devoted wife, mother, sister, aunt and friend! She retired from CILCO in 1997 after 34 years of dedicated service in CILCO's Accounts Payable Department. She was a lifelong member of St. Joseph’s Catholic Church; formerly St. Martin DePorres, where she formerly held leadership positions in the Alter & Rosary Society. Patricia had a green thumb as she loved gardening. She also enjoyed traveling and shopping. Patricia loved her children, grandchildren extended family, and her fur babies, Blackie, Rockie and the late Ruby Dee. Patricia leaves to cherish her most precious memories her loving and devoted children; Steve (Chritty) Harper of Peoria, Katrina (Darrell) Grice of Tampa, FL, Karlene (Lorenzo) Claridy of Chattanooga, TN, Kristy O’Neal of Tampa, FL and Kwan (LaQuasha) Hill-O’Neal of Peoria; five brothers, Frankie (Essie) Harper of Brookfield, WI, Joseph (Kathy) Harper of Columbus, OH, Robert (Iris) Harper, Wayne Harper and Bill Harper of all of Peoria; one sister, Mary Elizabeth Harper of Portland, OR; 12 grandchildren; 2 great grandchildren and a host of nieces, nephews, other relatives and friends. She is also preceded in death by her parents and one brother, Charles Harper. A two-hour visitation will be held Thursday, October 25, 2018 from 5:30 PM – 7:30 PM at St. Joseph Catholic Church. A Funeral Mass will be held at 11:00 AM, Friday, October 26, 2018 also at St. Joseph Catholic Church with a visitation one-hour prior beginning at 10 AM. Father Alexander Millar is the Celebrant. Patricia will be laid to rest at Resurrection Cemetery. Simons Mortuary has been entrusted with the arrangements. Online condolences may be made at SimonsMortuary.com.

Mrs. Patricia Mae O&#8217;Neal, 79, of Peoria, IL transitioned peacefully at 11:17 AM on Sunday, October 21, 2018 at her home surrounded by her family. Patricia was born in Pontiac, MI to Henry Melvin and Letha Mae (Ford) Harper. During her... View Obituary & Service Information

The family of Mrs. Patricia Mae O'Neal created this Life Tributes page to make it easy to share your memories.