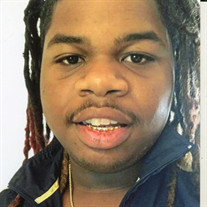 Mr. Rashad Mikel Williams, 19, of Peoria Heights, IL passed away on Sunday, June 20, 2021. Rashad was born on May 29, 2002 to birth parents, Rochelle Yvette (Criss) and Denardo Williams, Sr. Rashad’s adoptive parents are Michael, Sr., and Zelena (Sanders) Winters. Rashad was a proud graduate of Peoria Central High School. Rashad was a jack-of-all-trades! He could fix a car, cut hair, cook and was a carpenter; he could build whatever he put his mind to. He was very creative and could design most anything. He had a passion for riding dirt bikes, four wheelers and buying cars. Rashad loved to Rap and was a big fan of Rap music. He was a fun-loving and a kind person who loved his family. Rashad had a big heart full of compassion for others. He will be remembered by his amazing smile and being a hot head. Rashad is survived by his birth parents, Rochelle Y. (Danny) Worley of Peoria, IL and Denardo Williams, Sr.; his adoptive parents, Michael, Sr., and Zelena Winters of Peoria, IL; his maternal grandparents, Pastor Robert, Jr., (Clementine) Criss, Brenda Martin and Ricky Ross all of Peoria, IL; his paternal grandmother, Carolyn Taylor of Peoria, IL; four brothers, Ryu Winters, Rveon Criss Giles, Maleek Winters and Michael Winters, Jr.; six sisters, Rniya Criss, Trinity Augusta, De’Naryka Williams, Zaneta Winters and Mecha Winters all of Peoria, IL and Deniyja Williams of Atlanta, GA; a host of aunts, uncles, nieces, nephews, cousins, other relatives and friends. He is preceded in death by his brother, Denardo Williams, Jr.; his great grandparents, Rev. Emeritus Robert Criss, Sr., Georgianna Criss and Bertha Criss, Velma Sanders; and his aunt, Janet Jackson. The Funeral Service is Private. Simons Mortuary has been entrusted with arrangements. Online condolences may be made at SimonsMortuary.com.

The family of Mr. Rashad Mikel Williams created this Life Tributes page to make it easy to share your memories.