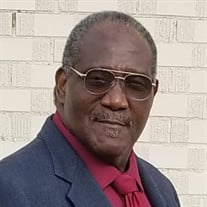 Mr. Richard “Bo” Clifton Pickens, 66, of Peoria, IL transition to be with the Lord, Sunday, April 4, 2021 at 1:40 pm at UnityPoint Health Methodist Hospital. Richard was born on July 22, 1954 in Peoria, IL to Lewis, Sr. and Mattie McClain-Greene. He married to Glenda Rasberry, who precede him in death. Richard affectionally known as “Bo” was well known around the city because of his huge extended family and his love for people. He enjoyed spending time with his family and friends. His children and grandchildren were very dear to his heart. He enjoyed spending time with his grandsons talking about their athletic careers and facts of life, while nurturing and being a great support for his granddaughter. Bo also enjoyed giving everyone a hard time. He called it “His way of making people happy.” When Bo was not spending time with his family, you could find him browsing the internet to find and purchase random things no one has ever heard of or playing Candy Crush. He also enjoyed watching Judge Judy, crazy videos on YouTube, or a classic movie he accidently found on the Firestick. We definitely can’t forget about his all time favorite hobby, not playing chess, BUT BEATING EVERYONE AT CHESS. He coined himself “The Chesstizer!” Many left the chess board with their head hung low because he was just that good. He never wanted to mention the games he lost against his friend, Andy Pickett. Richard was a man of faith and loved God with all his heart. His greatest testimony was overcoming his drug addiction and giving his life to God. Richard was clean and sober for 20 years. He was very open about his recovery and never failed to acknowledge God’s hand over his life. Richard used his testimony to help other struggling with drug addiction and served as a group leader for a couple of drug programs in the Peoria area and the few years he lived in Minneapolis, MN. Richard leaves to cherish his precious memories, his daughter, Clea (Marcus) White of Peoria, IL; two son, Courtland (Mary Jane) Pickens, Sr. of Golden Valley, MN and Cardell Pickens of Peoria, IL; one brother, Lewis (Patricia) Pickens, Jr. of Joliet, IL; six grandchildren, Quesha, Tre’Von, Mechai, Tristen, Courtland, Jr., and Zyara; two great-grandchildren, Shemar and Sebastian and a host of nieces, nephews, cousins and friends who loved him dearly. He is preceded in death by his parents, grandparents, his wife, Glenda Pickens, his eldest son, Clifton Pickens, one brother, Melvin Greene, two sisters, Angela Phillips and Karen Hampton. A private graveside service will be held at 11 am on Friday, April 16, 2021 at Historic Springdale Cemetery. Elder Garfield Gaines, Assistant Pastor of Love and Kindness Ministries C.O.G.I.C. Simons Mortuary has been entrusted with arrangements. Online condolences may be made at Simons Mortuary. The service will be live streamed on Simons Mortuary's Website or Facebook page at https://www.facebook.com/Simons-Mortuary-232095303487150 promptly AT THE TIME OF THE SERVICE. Due to Covid-19 restrictions, social distancing will be observed. To be consistent with recommendations from the National Funeral Directors Association (NFDA), funeral home directors have been instructed and should follow CDC guidelines on gatherings, including those directly related to funerals, visitations, or graveside services. *In an effort to mitigate the spread of COVID-19, we ask that everyone in attendance: wear a face mask and refrain from hugging, kissing and shaking hands (as hard as it is to see someone you care about and not touch them). *It is our responsibility as a Funeral Directors, to do everything we can to advise families in order to honor our beloved Families and to keep everyone as safe as possible. Thanks in advance for your cooperation!

The graveside service will be live streamed on Simons Mortuary's Facebook page at https://www.facebook.com/Simons-Mortuary-232095303487150/

Send flowers to the Pickens family.