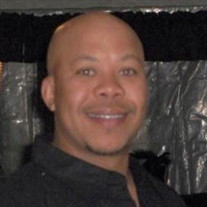 Mr. Ricky Lamont Johnson, 51, of Peoria, IL transitioned from this life to his heavenly home at 10:31 pm Sunday, March 22, 2020 at his home. Ricky was born on October 31, 1968 in Peoria, IL to Joan Frances (Parker) and Willie Dee Johnson, Sr. He was educated in Peoria District 150 Schools and was a 1988 graduate of Manual High School. He married the love of his life, Marseia Smith and shared over 28 years of marriage together until her passing April 3, 2018. Ricky was down to earth, easy to talk to. He was spiritual and loved to engage in spirited debates. He was a great problem solver and was a whiz at math. He was a caretaker. Ricky had a passion for cooking. He loved family time, playing chess, talking on the phone and watching movies. Ricky is survived by one son, Karrington (Dion) Johnson of Junction City, KS; two daughters, Justus and Liberti Johnson of Peoria; five brothers, John (Ruby) Parker of Atlanta, GA, Marion (Diane) Parker, Tonaio (Rose) Johnson, Kenneth Parker and Sean Jones all of Peoria; two sisters, Renetta Watts and Shielondria (Shane) Parker both of Peoria; his step-father, William Jones of Peoria, who raised him; two goddaughters, Taylor Johnson and Brandy Osgood; and a host of nieces, nephews, other relatives and friends. Ricky was preceded in death by his wife; parents and 2 brothers, Floyd Parker and Willie D. Johnson, Jr. A private Funeral service will be Friday, April 3, 2020 at 11:00 am at Simons Mortuary, with a 10:30 am visitation. Pastor Deveraux Hubbard will bring words of comfort to the family. Ricky will be laid to rest at Lutheran Cemetery. Online condolence maybe made at simonsmortuary.com. The Funeral service will be streamed on Facebook Live @ simonsmortuary.com.

The family of Mr. Ricky Lamont Johnson created this Life Tributes page to make it easy to share your memories.