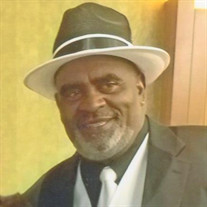 Mr. Ricky O’Conner, Sr., 61, of Peoria, IL passed away at 1:23 am on Friday, August 17, 2018 at his home surrounded by his family. Ricky was born on February 6, 1957 in Peoria, IL to Patricia Ann Jackson and Gause White O’Conner. He was baptized at an early age at Christian Family Center where he continued to be a member. He was educated within the District 150 Public School system. Ricky served his country in the US Army. After his service, Ricky worked in construction for years as an iron worker and member of the Mid-America Labor Union. Ricky was an avid golfer and had received many trophies taunting his golfing skills. He was a member of the Progressive Golf Club and League. He loved fishing and was a strong swimmer. Although not known to many, but Ricky’s other talents included singing and dancing. Ricky loved his family especially his children and grandchildren. Left to cherish his most precious memories is his wife, Darlene Coates-O’Conner of Peoria; two sons, Carlos (Stephanie) O’Conner of Peoria and Ricky O’Conner, Jr., of the Quad Cities; two daughters, Carmen (Denise) O’Conner-Jackson, Carmisha (Darius) Turner both of Peoria; a special daughter, Carrisa Irby of Peoria; one brother, Jon’Darrin of Peoria; four sisters, Linda Bryant of Country Club Hills, IL, Shelia Cayson-Marshall of Renton, CA, Tina Hatcher of Peoria and Kimberly (Jerry) Moore of Federal Way, WA; three uncles, Edward Jackson, Donald (Ernestine) Jackson and James (Mary) Jackson all of Peoria; 17 grandchildren, 2 great grandchildren; and a host of nieces, nephews, other relatives and friends who absolutely adored Ricky. He is preceded in death by his parents; grandparents; one sister, Tricia G. Flemming; one nephew, Zachary O’Conner and his fury son, War Bear. Funeral services will be held at 10 am on Saturday, August 25, 2018 at Heaven’s View Christian Fellowship with a visitation beginning at 9 am. Pastor Cliff Parks will officiate. Ricky will be laid to rest at Parkview Cemetery. Simons Mortuary has been entrusted with arrangements. Online condolences may be made to SimonsMortuary.com.

The family of Mr. Ricky O'Conner Sr. created this Life Tributes page to make it easy to share your memories.

Send flowers to the O'Conner family.