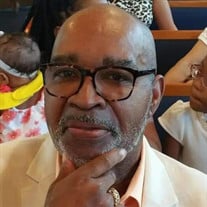 Elder Robert Lee “Book” Chalk, 67, of Peoria, Illinois; formerly of Hiram, GA, left his earthly home to be with the Lord at 11:28 p.m. on Wednesday, October 2, 2019 at OSF St. Francis Medical Center, Peoria, IL. Robert was born in Bloomington, IL on May 21,1952, to Robert Chalk and Gracie (Neal) Thomas. He married Dorothy Mae Burns on February 10, 1972 and to their union five children were born. Robert graduated from the CH Mason Theological Seminary, C.O.G.I.C. in Atlanta, GA where he earned his Associates Degree in Theology. Robert had a 45-year career as a heavy equipment engineer. While in Peoria, IL he worked at Local 649 and was an entrepreneur owning Chalk’s Towing Company. Later in life he moved to Dallas, GA where he worked at Local 926 retiring in 2010. Robert gave his life to Christ at an early age at Faith Tabernacle C.O.G.I.C., and later attended Power House C.O.G.I.C., in Peoria, IL. Upon moving to Georgia, he became a member of Community Outreach C.O.G.I.C., in Hiram, GA, where he was an Ordained Elder, worked with the Ministerial staff and was Assistant Superintendent of Sunday School. Robert loved fishing, bowling, traveling, taking pictures, going to movies and eating at Marietta Diner in Georgia. He had a black belt in Taekwondo and was an avid motorcyclist. Later in life, he was formerly married to Dawn Watson. Robert leaves to cherish his precious memories his former wife and last caregiver, Dorothy Chalk of Peoria; three sons, Robert Chalk, Jr. of Douglasville, GA, Jeremiah Chalk of Hiram, GA and Monti Lowe of Douglasville, GA; four daughters, Clora Bradley of Denver, CO, Gracie (Walter) Nealy of Angier, NC, Robin Lateef of Aurora, CO and Ashley Lowe of Baltimore, MD; twenty-two siblings; 17 grandchildren; 5 great-grandchildren; and a host of nieces, nephews, cousins, other relatives and friends. He was preceded in death by his parents; 2 sisters, Shirley Jones and Blanche Chalk and one brother, Eddie Chalk. Funeral services will be held at 10 a.m., Saturday, October 12, 2019 at Peoria Friendship Baptist Church with a visitation at 9 a.m. Rev. Dr. Claude Russell, Jr. is host Pastor. Elder Adrian H. Patterson will officiate and Elder Felton Beck, Jr. will bring forth the eulogy. Robert will be laid to rest at St. Mary’s Catholic Cemetery. Simons Mortuary has been entrusted with arrangements. Online condolences may be made at SimonsMortuary.com.

The family of Elder Robert Lee "Book" Chalk created this Life Tributes page to make it easy to share your memories.

Send flowers to the Chalk family.