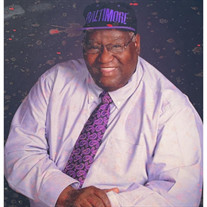 Brother of Florence Gilkesson and James D. (Cynthia) Gilkesson of Simons Mortuary, Mr. Robert Morris Gilkesson, 71, made his transition on December 4, 2021, at his home in Charlotte North Carolina. Affectionately known as “Gilk,” “Bob,” “Big Bob,” or “Robert” was born on August 26, 1950 in Washington, DC to MaryLouise (Marshall) Gilkesson and Alfred Charles Gilkesson, Sr. He and his siblings Florence L. Gilkesson, Alfred C. Gilkesson, Jr., and James D. Gilkesson were raised in Landover, MD. Robert attended both catholic and public school in Prince Georges County, Maryland. He was a proud 1968 graduate of Fairmont Heights High School, in Landover, Maryland, where he met his future wife Annette Hall in 1964 After graduating from high school, he attended Shaw University, in Raleigh, NC. During his time at Shaw University, he became a proud member of Groove Phi Groove Fraternity, Inc., in 1970. He went on to earn his bachelor’s degree in behavioral sciences from Shaw University and continued to be an avid alumnus. Both Robert and Annette Hall continued their union, even while she was a student at Morgan State University in Baltimore, Maryland. After completing their collegiate studies, they rejoined their union and married on April 14, 1972. They raised 3 children Reginald, Rochelle, and Rashaad Gilkesson. In 1978, they moved the family to Baltimore, Maryland and resided there for the next 41 years. During this time, he worked in Transportation as a Bus Driver and Transporter for many years, prior to his retirement. He was a loving and devoted husband and father who cherished his extended family and friends. He had a passionate love for music and sports, as he spent his free time listening and recording music and keeping track of his favorite teams the Baltimore Orioles, Baltimore Ravens, Carolina Panthers, Charlotte Hornets, and Washington Wizards. He often recorded tapes and sent them to all his family and friends. He was concerned about the well-being of others. He wrote numerous letters and made phone calls to all that he cherished and loved. More importantly, he dedicated his life to his wife Annette Gilkesson, of 49 years until his final day on December 4, 2021. He enjoyed his final days by spending his precious moments with his wife Annette, children, grand-son, great grand-children, family, and friends. Also, both he and his sister Florence Gilkesson, communicated daily on the phone. Robert and Annette cherished there many years together along with their children, grand-son, great grand-children, family, and friends. “He never met a stranger” and always had compassion for the well-being of others. He expressed his love in many ways, as he never wavered from writing letters, mailing music mixed tapes or making phone calls. He was comforted by other’s accomplishments and milestones in their lives. Moreover, he was an avid storyteller and historian, as he could recall important events that were important to him and others. He opened his heart and shared his wisdom to all who were in his presence. He had a profound impact as his personality was unforgettable. He will be truly missed, and his shared memories will live on. Robert is preceded in death by his parents and his brother Alfred, Jr. Robert leaves behind his beloved family which includes his loving and devoted wife of 49 years, Annette Gilkesson of Charlotte, NC; his loving and devoted children, Reginald (Joy) Gilkesson of Charlotte, NC, Rochelle (Carlton) Smith of Charlotte, NC and Rashaad Gilkesson of Maryland; his sister, Florence Gilkesson of Peoria, IL; his brother James (Cynthia) Gilkesson of Peoria, IL, Stevie Anderson (Charlotte, NC), cousin Sister Charlotte Marshall (Baltimore, MD), cousin Adrienne Cozart (Lubbock Texas), his grand-son Reginald Averi Gilkesson (Maiya); great grandchildren Inca & Iiya all of Charlotte, NC, & host of numerous nieces, nephews, cousins, in laws, family and friends. Public viewing will be held from 11am-12 pm and Funeral services will be held at Alexander Funeral Home Chapel on Saturday, December 11, 2021, beginning at 12 pm. Burial service will follow at Gethsemane Cemetery and Memorial Gardens at the conclusion of service. Arrangements entrusted to Alexander Funeral Home at 1424 Statesville Avenue, Charlotte, NC 28206 where condolences may be faxed to 704-333-1173 or emailed to [email protected] Funeral services will be live streamed.

The family of Mr. Robert Morris Gilkesson created this Life Tributes page to make it easy to share your memories.

Send flowers to the Gilkesson family.