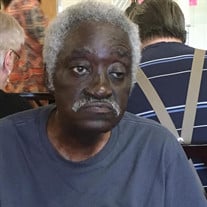 Mr. Robert Johnson, Jr. 68 of Peoria, Illinois passed from this life to eternity on Sunday February 25, 2018 at 1 p.m. at his home which he shared with Ms. Hilda Tyler whom he called “Mama”. Robert was born on July 4, 1949 in rural Benoit, Ms. to Robert and Louella Mammie (Henderson) Johnson, Sr. He was a US Army veteran who honorably served during the Vietnam Conflict. He married Sandra (Gray) Johnson and she survives. He is also survived by his only brother Houston (Jiggs) Owens, his only child, Tiana L. Johnson, two grandchildren, Saboyce S. Thompson and Derek L. Miller and a host of nieces, nephews, cousins and other relatives and friends of Mr. Robert Johnson, Jr. Robert is also survived by three adopted sons, Tyrone Powell, Richard and Kenny Gray, their siblings LaTonya Gray and Glen Caruthers. Additional survivors include the children of his longtime girlfriend, Brenda Dye, Sara, Sonya, Gelishia, Eugene, Marvin and Dametri Dye and Katie Sargent all of Peoria. He was preceeded in death by both parents, both maternal and paternal grandparents, one brother, Mr. Eddie Carroll and his longtime girlfriend, Ms. Brenda Dye. A memorial service will be held in his honor at 3:00 p.m. on Saturday, March 3, 2018 at New Life Christian Church located at 2018 W. Kellogg Avenue West Peoria, Illinois. His visitation will be one half hour prior to the service at 2:30 p.m. Mr. Robert will be laid to rest at Camp Bulter Cemetery in Springfield, Illinois. Simons Mortuary has been entrusted with arrangements. Online condolences may be made at SimonsMortuary.com.

The family of Mr. Robert Johnson Jr. created this Life Tributes page to make it easy to share your memories.

Mr. Robert Johnson, Jr. 68 of Peoria, Illinois passed from this...