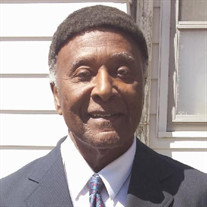 Roland “Mac” W. McDougald Sr., 95, passed away peacefully, Monday morning, April 13, 2020, at home with his son, Roland McDougald Jr. by his side. Born on April 24, 1924 in Vero Beach, Florida to the late John and Hattie (Smith) McDougald, Roland had been a resident of Galesburg Illinois since November 1950. Growing up, Roland picked oranges in the Vero Beach groves along with his siblings until he graduated high school. He enlisted in the Navy in 1943, serving in World War II on the USS Intrepid. Upon discharge in Aurora, Illinois, he was lucky enough to catch the attention of and marry “that cute girl from Ft. Pierce” that he used to see when his family visited town. Rebecca Davis became his bride in 1946 and together, they relocated to Chicago, Illinois, where he used his G.I. Bill benefits to study Mortuary Sciences and apprentice with local morticians. Roland’s skills eventually caught the attention of Mrs. Georgia Fletcher, whose husband owned a small funeral home in Galesburg, Illinois. Mrs. Fletcher saw the promise in Roland and offered to sell to the talented African-American male in a town with a relatively low African-American population. Roland seized the opportunity and relocated his young family to Galesburg to operate the Fletcher & McDougald Funeral Home. He and Mrs. Fletcher agreed that keeping “Fletcher” in the title would make the transition easier for those who might not be open to using a minority-owned company in the early 50s. Roland expanded his work by serving as the Director at Simons Mortuary in Peoria, Illinois after Mr. Simons passed away. In addition to the funeral homes, Roland worked at the Galesburg Research Hospital on the third shift; retiring in 1985 as Assistant Chief of Security. Roland also owned Able Flower Shop on Seminary Street in Galesburg. Over the years, he served the community by helping to found the Galesburg Research Hospital Credit Union, and served on the Carl Sandburg College Mortuary Science Advisory Committee. He was a member of the Allen Chapel AME Church for many years. Roland closed the doors of Fletcher & McDougald when his health began to fail, but in honor of his legacy, the staff of Simons Mortuary allowed him to continue serving as an honored part of their ceremonies until well into 2019. Roland was preceded in death by his parents, John McDougald and Hattie McDougald (Smith), his wife Rebecca McDougald (Davis), five brothers: John, Clyde, Anguish, Tommy and Wayman McDougald, and one sister: Leona McDougald. Roland leaves behind two children: Freda Hall and Roland McDougald, Jr., who will both miss interacting with him on a daily basis. He also leaves behind eight grandchildren: Rebecca Cribbs (Harry), Lisa Harris (Jerry Townsell), Rhonda Perry (Mike), Deanna Nowell, Ronald Hall, Brian McDougald, Tyrone Hall and Riki Gordon (Jason). Roland lived long enough to have strong, active relationships with many of his great grandchildren: Matthew Roland Harris, Gracie Taylor, Brytney Walton (James), Bobby Taylor, Michala Nunn, Jordan Perry, Drew Perry, Samirah Nowell, Amani Nowell, Kyce Hall, Katrina Hall, Darius Hall, Roni Hall, Cyrus Rollins, Shaylee Rollins, Dakari McDougald, Justice McDougald, Teryn Hall, Blake Hall, Teela Hall, T.J. Hall, Brantley Hall, Brayden Hall, Hunter Gordon, and Gallie Gordon. Roland was also blessed to meet several great-great grandchildren: Matthew Harris Jr., Ashanti Harris, Tayla Harris, Clowie Love, Cayden Love, Kennedy Wigley, Shanyla Cousett, Jayden Walton, Jayvin Walton, Jalayah Nunn, and Zayden Nunn. Roland will be fondly remembered by family as a strong and loving patriarch. His granddaughter, Lisa Harris, will especially miss visiting him almost every day for lunch. Friends and community members will remember him as the thoughtful and compassionate Funeral Director at Fletcher and McDougald Funeral Home and Simons Mortuary, through which he was afforded the honor of serving as a calm and respectful witness for the many families who said good-bye to their loved ones over the years. A private service for family only will be held on Sunday, April 19, 2020 from 3:00 pm – 4:00 pm and will be streamed on Facebook Live on the Simons Mortuary Facebook page. Pastor Dale Kelley of Chicago’s Clair Christian United Methodist Church will bring words of comfort. Reverend Tyson Parks III of Peoria’s Bethel United Methodist Church will read scriptures. The Facebook Live video will also be available for viewing later on SimonsMortuary.com. Roland will be buried in Pine Grove Cemetery in Fort Pierce, Florida, next to his wife and close to his parents and multiple siblings on Saturday, April 25, 2020 with the assistance of Stone Brothers Funeral Home.

Send flowers to the McDougald family.