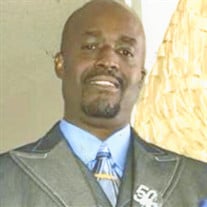 Ronald Lee Furness, Jr., 52 of Aurora, CO; formerly of Peoria, IL peacefully transitioned to be with the Lord Tuesday, December 11, 2018 in Aurora, Colorado. Ronald was born October 24, 1966 in Peoria, IL to Polly (Gaines) and Ronald Lee Furness, Sr. He was a graduate of Woodruff High School where he played basketball, football and ran track. Ronald, Jr., married the love of his life and childhood sweetheart, Stephanie Lynn Williams, in Peoria on June 1, 1991. Ronald, Jr., was known by family and friends as Ronnie and his closest friends knew him as “Ron Dew”. Ronnie accepted Christ at an early age as a member of Peoria Friendship Baptist Church under the leadership of the late Pastor Willie Williams, Sr. While at Friendship, Ronnie sang in the choir and was a youth usher. He was a former member of Now Faith Church in Denver, CO under the leadership of Pastor Leon Emerson for several years. Ronnie served as deacon and choir member, and was a valuable member of the Now Faith Men’s Choir. He was currently a member of Restoration Christian Fellowship under the leadership of Pastor Felix Gilbert where he served as an usher before his passing. Ronnie’s passion in life was driving tractor trailer trucks and spending time with his family. He was employed by Quality Electrical Distribution (QED) for several years. Ronnie was a very hard worker. Always positive and caring. Ronnie leaves to cherish his most precious memories his loving and devoted wife for more than 27 years, Stephanie Furness of Aurora, CO; two sons, Ronterris (Sheriece) Furness of Denver, CO and She’Ron Furness of Aurora, CO; one daughter, Breanca Furness also of Aurora, CO; his parents; Ronald, Sr., and Polly Furness of Peoria, IL; two brothers, Rodney (Rhonda) Furness of Orlando, FL and Marcus (fiancé - Shondra) Furness of Peoria, IL; one sister, Mevelyn (Rashad) Corpening of Fort Worth, TX; eight grandchildren, Shay, Javion, Janai, Arlyza, Serenity, Ke’Mani, Samiah and Reign; and a host of cousins, aunts, nephews, other relatives and friends. He is preceded by his grandparents, George, Sr., & Dorothy Furness and Caleb & Leslie Mae Gaines. Funeral services will be held at 10 am on Saturday, December 29, 2018 at Peoria Friendship Missionary Baptist Church with a visitation beginning at 9 am. Host Pastor Rev. Dr. Claude Russell, Jr. Officiant will be Pastor Joseph Cherry of Mt. Sinai Baptist Church. Ronnie will be laid to rest at Swan Lake Memory Gardens. Simons Mortuary has been entrusted with arrangements. Online condolences may be made at simonsmortuary.com

The family of Mr. Ronald Lee Furness Jr. created this Life Tributes page to make it easy to share your memories.

Send flowers to the Furness family.