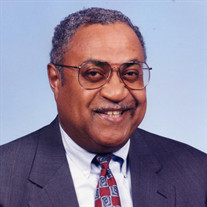 Mr. Ronald Forrest Locker, 81, of Peoria, IL passed away at 8:16 AM on Wednesday, March 13, 2019 at UnityPoint Health Methodist. Ronald was born on September 19, 1937 in Washington, DC to Edward and Sadie (Tillett) Locker. He married Johnnie Murphy in Washington, DC and had 53 years of holy matrimony. Ronald was a US Air Force Veteran. He was Dealer Operations Support Manager at Caterpillar, retiring in 2000 after 32 years of service. Ronald attended Bowie State and Syracuse University. He graduated from George Washington University in 1968 and later received his Masters of Business Administration Degree (MBA) from the University of Chicago. Ronald volunteered at Planned Parenthood, the Crittenton Center and was a past Board president at Agency on Aging. Ronald is survived by his wife, Johnnie Locker of Peoria; two sons, Jonathan Locker of San Diego, CA and Alexander (Monica) Locker of Country Club Hills, IL; one daughter, Veronica Locker of Indianapolis, IN; one brother, Kurtiss Locker of Washington, DC; one sister, Paula Hart of Washington, DC; cousins with whom he was raised, Sheila Dukes, Richard Gross, Rev. Stephen Tillett and Florence Alcorn; two grandchildren, Nathaniel Locker and Adrianna Locker and a host of nieces, nephews, other relatives and friends. He is preceded in death by his parents; his grandmother who raised him, Hattye Tillett; his step mother, Muriel Locker; his aunt Jennie Gross; his uncle Malcolm Tillett; other relatives and friends. Ronald attended Bethel United Methodist Church where funeral services will be held at 11 AM on Friday, March 22, 2019. A visitation will be held one-hour prior to the service beginning at 10 AM. Pastor Tyson Parks, III, will officiate. Ronald will be laid to rest at Swan Lake Memory Gardens where US Air Force Military Honors will be rendered. In lieu of flowers, donations may be made to Bethel United Methodist Church or the local Chapter of the American Heart Association. Simons Mortuary has been entrusted with arrangements. Online condolences may be made at SimonsMortuary.com.

Mr. Ronald Forrest Locker, 81, of Peoria, IL passed away at 8:16 AM on Wednesday, March 13, 2019 at UnityPoint Health Methodist. Ronald was born on September 19, 1937 in Washington, DC to Edward and Sadie (Tillett) Locker. He married Johnnie... View Obituary & Service Information

The family of Mr. Ronald Forrest Locker created this Life Tributes page to make it easy to share your memories.

Send flowers to the Locker family.