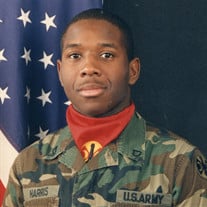 Mr. Ronald Dewayne Harris, 49, of Peoria, IL passed away on Monday, April 30, 2018 at his home. Ronald "Poncho" was born on March 23, 1969 in Peoria, IL to Regina Harris and Freddie E. Wright, Sr. Ronald was a 1988 graduate of Manual High School where he was a member of the football team. Ronald went on to honorably serve the United States Army from 1988 to 1992, where he did a tour of duty during the Desert Storm War. Ronald was a certified welder, presently employed with People Ready. Ronald also enjoyed playing flag football with the Peoria Flag Football League. He played basketball in numerous recreation leagues around the city. He was an avid spades and poker player, where he enjoyed numerous nights with his friends. He was a kind and fun loving individual with a heart of gold. He would do anything for anybody. Ronald is survived by his parents, Freddie, Sr., and Regina Wright of Peoria; three daughters, Christina Odom, Katrina Harris and A'Nyjah Jackson all of Peoria; one son, Seth Cage of Peoria; one sister, Felicia Wright; one brother, Freddie Wright, Jr.; his grandmother, Maggie L. Harris; and a host of aunts, uncles, nieces, nephews, cousins and other loved ones and friends. He is preceded in death by his grandfather, Johnnie L. Harris, his grandmother, Frankie Little and his uncles, Russell Harris and Christopher Stewart. Funeral services will be held at 10 am, Wednesday, May 9, 2018 at Sovereign Grace Baptist Church with a visitation at 9 am. Host Pastor Alvin Riley, Sr will officiate and Elder Tommy Lee Harris will bring the eulogy. Ronald will be laid to rest at Camp Butler National Cemetery at 2 pm in Springfield, IL, where U.S. Army Military Rites will be rendered. Simons Mortuary has been entrusted with arrangements. Online condolences may be made at SimonsMortuary.com.

The family of Mr. Ronald "Poncho" Dewayne Harris created this Life Tributes page to make it easy to share your memories.

Send flowers to the Harris family.