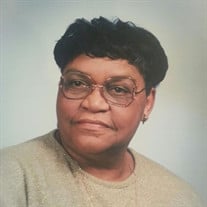 Ms. Rosalie Mable O’nieda Rudd-Stone, 89, of Peoria, IL, passed away peacefully at 11:06 pm on Sunday, December 3, 2017 at OSF St. Francis Medical Center. Rosalie was born July 9, 1928 in Litchfield, Illinois to Fred Lee Sr. and America (Smith) Rudd. She married Kenard L. Stone Jr., on August 20th 1949. Rosalie received Christ in her life at the age of 12 at Mt. Zion Baptist Church under the pastoral leadership of Reverend Dickson. At an early age she was a leader in the Girl Scout Troops. She attended Peoria Schools; Lincoln Elementary School, Roosevelt Jr. High School, and Graduated from Manual High School on June 12, 1946. She then attended the following colleges at Lincoln University in Jefferson City Missouri and Bradley University in Peoria Illinois and studied music. Rosalie was a member of the Service Group Girls Choir. She also sang as a Soloist for the Acapella Choir at Roosevelt Jr. High, Manual High Schools and on into College. She served as the Music Director for Mt. Zion Baptist Church, the Senior Choir, the Young Adult Choir, The Young People's Choir, The Women’s Chorus and she organized the Male Chorus, just to name a few of her many activities. She also directed the NAACP and Carver Center choir for many years. She used her gift of singing at numerous events such as: Weddings, Church Programs, Funerals, Conventions, and Special Events such as, “NAACP for Mrs. Coretta Scott King”. She would also sing at her kitchen table while surrounded by family, friends, and at Family Reunions. She loved to minister in song! While Simons Mortuary was under the ownership of Mr. & Mrs. Simons she was often called upon to write obituaries and to sing at numerous funerals. She was gifted in reading music, conducting choirs, playing the piano and writing. These were just a few of her many talents. She was a very strong, smart and witty, wife, mother, grandmother, friend, mentor, and foster-parent. She raised 13 children and foster-parented over 100 children. Her door was always open and welcoming. She absolutely loved spending time with her family, friends, and enjoying life! Her hobbies were playing games with family & friends, crocheting, collecting pictures, newspaper articles, collector items and solving puzzles. She also created a Family Tree Book consisting of several generations. She received an abundance of honorariums, awards and certificates of achievements for a life well deserved and lived. In the 6th Grade she received the Stanford Achievement score of 5.2. In High School she ranked 174 in her class of 234. She received an Honor and Awards letter in 1946 for her participation in the Choir. Reverend Alphonso Lyons and the Adult & Young People's Choirs, and Members, celebrated her with a “This is Your Life” program in November 5, 1972. On June 21st 2008 an Article was written about her in the Peoria Journal Starr newspaper by Journalist, Pam Adams. She was also honored with a “Celebration of Life” event for her 80th birthday presented by her children on July 6, 2008, at which she received honorary letters of achievements along with a personal letter from President George W. Bush. She is survived by eight sons: Kenard Stone III, of Chula Vista, David (Marilyn) Stone of Stockton CA, Daniel Stone, of Champaign IL, Dale Stone, Stephen Stone, Ivan (Sabrina) Stone, all of Peoria. Special son, Reginald Stone of Dallas Texas, adopted son, Woodrow Stone of Iowa. Three daughters; Pauline Stone, of Alta Loma CA, Nancy Jackson of Peoria IL, Rebecca (Roland) Casey of Duarte, CA, adopted daughter, Sharnay Stone of Chicago IL; and a host of Grandkids, Great-Grandkids, Great-Great-Grandkids, Nieces, Nephews, Cousins, and Friends whose lives she has impacted. She is preceded in death by her Father, Mother, one Sister, Pauline Tate-Nance, four Brothers, Frank Rudd, Wilburn Rudd, Samuel Rudd and Fred Rudd, Jr., one daughter, Juanita Christine Stone, and one son, Sgt. Duane Alan Stone. She will forever be remembered among the many great Songbirds of her era and our generation. Funeral services will be held at 10 am on Saturday, December 9, 2017 at Mt. Zion Baptist Church with a visitation one hour prior beginning at 9 am. Pastor Alphonso Lyons, Jr., will officiate. Mother Rosalie Stone will be laid to rest at Historic Springdale Cemetery. Simons Mortuary has been entrusted with arrangements. Online condolences may be made at simonsmortuary.com.

The family of Ms. Rosalie Mable O'nieda (Rudd) Stone created this Life Tributes page to make it easy to share your memories.