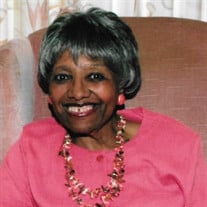 Ruby Williams, 85, formerly of Peoria, IL passed away at 11:04 am on Sunday, February 11, 2018 in Atlanta, Ga, after a long and courageous bout with Alzheimer’s. She was born in 1932, the daughter of E. M. and Cora (Spillman) Moore. She was married to Kenneth (Kenny) Williams who preceded her death on April 15, 2016. They had been married for 58 wonderful years. Prior to moving to Peoria, Ruby lived in Pine Bluff, AR, and graduated from Merrill High School in 1951. She also attended AM&N College in Pine Bluff. She moved to Peoria and married Kenny in 1958. Together, they were very active with community, business, church, family and friends’ involvements. Ruby loved, loved, loved her church, Bethel United Methodist Church. She was so involved that during a prolonged illness, she worried that no programs, trips or ministries would go on in her absence. Ruby was known for being Fashion Forward. Her passion for personal style transcended into a business named Unique Arts & Gifts. She was the “go-to lady” for fashionable hats, purses, jewelry, artwork and household appointment pieces. So many looked forward to her style shows featuring outstanding clothing and models. Ruby and Kenny loved traveling, entertaining and connecting with family and special friends across the U.S. They were very active in the community as well. “Connected at the hip”, one would generally not see one without the other. They were so cute as they progressed through the golden years. Their conversations became quite repetitive, but they engaged with each other as if it was the first time either of them had said it or heard it. The couple moved to Atlanta to be with their daughters and other family members. They experienced wonderful care while at Summerset Assisted Living. Ruby was preceded in death by her beloved son Andre’ Williams, her sister Erma Davis, her brothers Andre’ and Barry Moore and her grandson Coy Dumas. She is survived by her children Sandra Kay Alexander, Angela (Gil) Johnson and Steve Williams; her brother Eugene Williams and sister Gaye (Al) Wilson; five grandchildren, three great grandchildren and a host of nieces, nephews and extended family. Homegoing services will be held on Saturday, February 17 at 12 noon at her beloved Bethel United Methodist Church of Peoria, with a viewing at 11 a.m. Pastor Florene Scott will officiate. Ruby will be entombed at American Mausoleum, beside her husband. Simons Mortuary is entrusted with arrangements. Online condolences may be made at simonsmortuary.com.

The family of Mrs. Ruby Williams created this Life Tributes page to make it easy to share your memories.