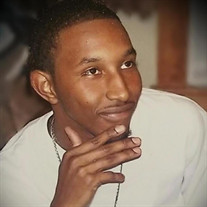 Mr. Ryan "Wood" William Greenwood, 30, of Peoria, IL transitioned from this life to his heavenly home on Wednesday, June 3, 2020 at OSF St. Francis Medical Center. Ryan, who was affectionately called “Pito” by his family and “Wood “by his friends was born on June 14, 1989 to Rachael A. (Lewis) Greenwood and Roger Clark Greenwood in Peoria, IL. He was educated in the Peoria District 150 schools. He was a 2007 graduate of Peoria Central High School where during his tenure there was team captain and a star basketball player. Ryan attended Lincoln College where he also played basketball. Ryan had such a passion for basketball that he became coach of the Legacy Basketball league to share his love for the sport with the youth in this community. Ryan was an amazing father to his children and father figure to other children in the Peoria community. He also loved his family; collecting Jordan shoes and loved going to car auctions. He last worked at Sherman’s Furniture and Appliance. Ryan leaves to cherish his most precious memories his loving and devoted mother, the Honorable Rachael Parker, Peoria’s County Clerk and his father, Roger Greenwood both of Peoria, IL; his loving sister, Riley Greenwood of Peoria, IL; his children Tre’Veon Lamar Greenwood, RaNiyah Marie Greenwood, Torrion Amire Coleman and Rashad Legend Moore and their mothers, Ronisha Coleman and Michell Moore all of Peoria; his paternal grandmother, Cruz Greenwood of Peoria; and a host of aunts, uncles, cousins and friends. He is preceded in death by a son, baby Ryan Greenwood; his maternal grandparents, Rosie and Floyd Lewis and paternal grandfather, William Greenwood. Private Funeral services for Ryan will be held at 12 Noon on Friday, June 12, 2020 at Victory Christian Church with a visitation from 10 am to 11:30 am. Pastor Deveraux Hubbard will officiate. The host Pastor is Charles Brown. Ryan will be laid to rest at Historic Springdale Cemetery. Due to Covid-19 mandates, social distancing will be observed. Please wear masks. The funeral service will be live streamed on Simons Mortuary's Facebook page at https://www.facebook.com/Simons-Mortuary-232095303487150/ In lieu of flowers, Memorials may be made to the Ryan W. Greenwood Educational Fund at CEFCU for his children. Simons Mortuary has been entrusted with the arrangements. Online condolences may be made at SimonsMortuary.com.

Mr. Ryan "Wood" William Greenwood, 30, of Peoria, IL transitioned from this life to his heavenly home on Wednesday, June 3, 2020 at OSF St. Francis Medical Center. Ryan, who was affectionately called &#8220;Pito&#8221; by his family and &#8220;Wood... View Obituary & Service Information

The family of Mr. Ryan "Wood" William Greenwood created this Life Tributes page to make it easy to share your memories.

Send flowers to the Greenwood family.